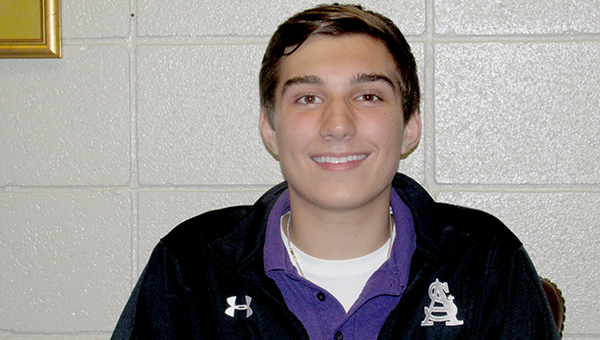 St. Aloysius senior Ryan Jarratt is one in a million, or rather one in 16,000.

He said he was somewhat surprised to learn of his selection.

“I knew there was a possibility, but nothing is for sure,” he said. “It feels pretty great; it’s a really big accomplishment. Something I’ve worked hard to get. I’ve had fantastic teachers.”

Jarrett has a 4.68 grade average and takes advanced placement classes at St. Aloysius. He is a member of the school’s tennis team, its mock trial team and its math and science and quiz bowl teams. His most enjoyable classes are U.S. government and computer science.

He has not decided on a college, adding, “I’m still trying to figure out where’s the best place for me to go.”

But his selection as a semifinalist, he said, “Definitely opens me up and better enables me to get into colleges throughout the country and allows me to get greater scholarships. It definitely is going to play a big roll in college for me.”

To become a finalist, semifinalists and their high school must submit a detailed scholarship application, providing information about the semifinalist’s academic record, participation in school and community activities, demonstrated leadership abilities, employment, and honors and awards received. A semifinalist must have an outstanding academic record throughout high school, be endorsed and recommended by a high school official, write an essay, and earn SAT scores that confirm the student’s earlier performance on the qualifying test.

“It’s something we’ve become used to,” St. Al principal Buddy Strickland said of Jarratt’s selection. “It’s an honor for the school, it a reflection of the effort that the teachers put in; it’s a reflection of his parents.

“He’s (Jarratt) not one dimensional; he’s not just a kid who spends all his time studying. He’s extremely well rounded. He just does a whole wide number of things. He’s played basketball in the past; he’s active in all aspects of what we do at school. I was not the least bit surprised when his name was the one we saw.”