After a needed bye week, Gators go on the road to face Columbus 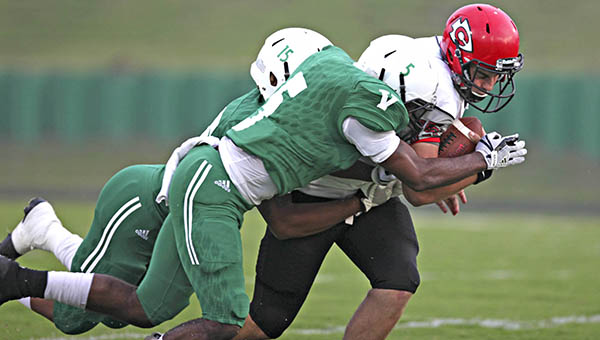 The Vicksburg Gators have had a week to rest, recharge and, most importantly, reset.

The Gators return from their bye week with a road trip to Columbus this Friday night. It’s a matchup of 0-3 teams seeking some form of success, as well as a chance for a fresh start heading into next week’s region openers.

“It was definitely a much-needed bye week. It was a chance to rest some injuries, refocus and re-energize a little bit, and get locked in for this week. On the mental side, it always helps to step away and not have to prepare for an upcoming opponent,” Vicksburg coach Lorenzo Breland said.

Neither Vicksburg nor Columbus have covered themselves in glory during their respective 0-3 starts, but they’ve also gone up against a formidable slate of opponents.

Vicksburg has lost to three perennial playoff teams in Oxford, defending Class 6A champion Clinton, and Warren Central. Columbus, which went 6-6 last season, is its fourth straight Class 6A opponent.

The level of competition has played into some of the struggles of both teams, Breland said, and could lead both of them to view this week’s game as an opportunity to shine.

“They’ve got good skill guys and have played some good competition,” Breland said. “Any time you get two teams that are 0-3, somebody’s definitely got to win so we’re going to do everything we can to make sure it’s us. We just have to match their intensity for four quarters.”

Stringing together four good quarters has been problematic for the Gators thus far. The most they’ve been able to put together has been two.

Vicksburg has only given up three first-half touchdowns so far this season, but has been outscored 70-6 in the second half. A lack of offensive punch and special teams mistakes have been the biggest culprits for the discrepancy.

The Gators have struggled to run the football, and two dropped punt snaps inside their own 30 have given opponents good field position to set up short touchdown drives. The offense has only scored two touchdowns in 12 quarters.

Breland said cleaning up those two areas was a point of emphasis during the bye week.

“We focused a lot on special teams and offense. Just understanding our offensive philosophy and getting the ball into the hands of our playmakers,” he said. “We put some extra film work in. It was a much-needed week to get in and evaluate everything.”

Some dry weather also helped. Breland had blamed some of the Gators’ offensive woes on a string of near-daily afternoon thunderstorms that limited the work they could do outdoors. The team worked inside in the school’s ROTC gym, but its cramped quarters still kept the Gators from implementing everything.

It has only rained twice in the last 10 days in Vicksburg, which has allowed the Gators to get onto their actual practice field adjacent to Memorial Stadium.

“It was a chance to get out there and work on some spacing issues, and things that we haven’t been able to work on,” Breland said.

Now they’ll head outside of Warren County for the first time this season — one of the first three games was at home, and the other two were played across town at Warren Central — hoping the work and the chance to reset pays off. A win would certainly lift the team’s confidence heading into the Region 2-5A opener against Germantown, as well as serving as confirmation that the things they’re doing can work.

“That’s the nail on the head. Getting momentum going to district, and playing with some confidence,” Breland said. “It’s a big game for a lot of reasons.”

ONLINE
For live scoring updates on Friday night, follow us at twitter.com/vixpostsports and facebook.com/thevicksburgpost