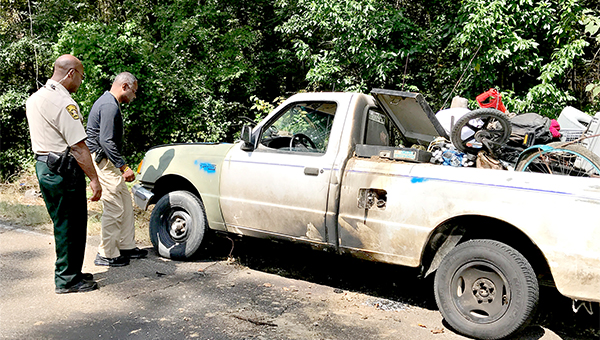 A Bovina man was severely burned Thursday afternoon when the homemade fuel system he was trying to repair on a pickup truck burst into flames and spread to his clothes, Warren County Sheriff Martin Pace said.

Central Mississippi, Pace said, is the designated burn unit for this region. Alexander’s condition was unavailable.

Pace said information from paramedics indicated Alexander may have third degree burns over 20 to 30 percent of his body. Joshua Jenkins, the owner of the pickup and a passenger in the vehicle, was not injured.

The incident occurred about 1:33 p.m. According to sheriff’s department reports, Alexander and Jenkins were northbound on Fisher Ferry Road when the pickup stopped running and he pulled the truck to the side of the road south of Amanda Drive to check the problem.

Pace said the pickup did not have a gas tank, and was using a fuel system composed of a plastic 5-gallon gas container connected to a fuel pump.

The fuel pump had a wire that was connected directly to the truck’s battery, and a fuel line from the pump to the engine.

While Alexander was trying to fix the problem, something caused a spark, setting the gasoline in the container on fire.

“We believe when the container caught fire, he tried to pick it up out of the truck and sling it away from the truck. When he did, burning gasoline got on his clothes,” Pace said.

Jenkins extinguished the fire on Alexander by putting dirt on the flames, and then put dirt on the gas container to extinguish that fire.

Funding for Mississippi’s public schools needs to be based on a formula that can best help the students, Lt. Gov.... read more