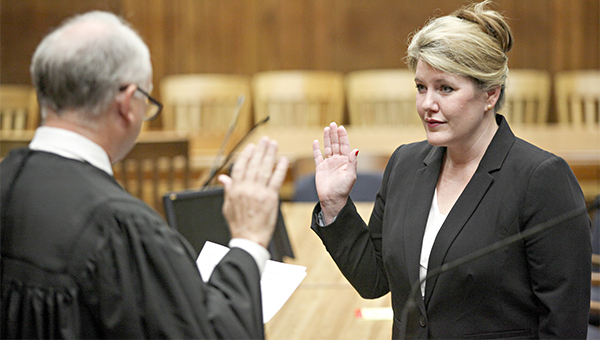 The Warren County District Attorney’s Office is getting an extra hand.

Vicksburg resident and in her last year at Mississippi College of Law, Joy Kilgo was sworn in Thursday to work with District Attorney Ricky Smith as an assistant under the state’s Limited Practices Act, which allows law students to work in a limited practice under the direction of a licensed attorney. Kilgo graduates in December.

“This is a wonderful opportunity,” she said. “Three students were selected to participate in the program, and I was fortunate to be one of the three. I’m a graduate of Warren Central, and it’s good to be able to do this at my home and with people I grew up with and admired.”

Smith said Kilgo will work in his office assisting with research and trial preparation, and will also do some pleas and revocation hearings.

He said Kilgo has been working with his office for several months helping assistant district attorneys with research and trial preparation, and has sat in with them on trials.

“It’s always good when we can get some extra help with research and preparations for trial,” he said.

Kilgo said working with Smith and his staff will give her hands-on experience in trial research and preparation that she could not get from sitting in a class.

“This is the kind of experience that you can’t get from a book,” she said.

“We have had other students working under the program in our office in the past,” Smith said, adding assistant district attorney Bert Carraway worked in the district attorney’s office as a law school student under the limited practices act.

A Bovina man was severely burned Thursday afternoon when the homemade fuel system he was trying to repair on a... read more