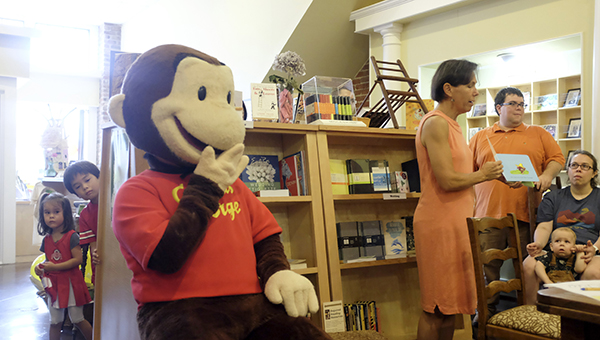 Vicksburg area children and their parents visited Lorelei Books Saturday to monkey around with Curious George and help him celebrate his 76th birthday.

Curious George is the mischievous little monkey who’s the title character in the popular books written by Margret and H.A. Rey that are read and loved all over the world.

Saturday’s event included book readings, including a reading of a braille version by WVBG owner Mark Jones, activities, a visit by Curious George, and “Happy Birthday” sung by parents and children.

“The publishers of the book encourage us to celebrate George’s birthday, and we have story time every Saturday; it seemed like a good idea to have a party for George and activities like blowing up balloons and reading books,” said Lorelei owner Kelle Barfield.

“It’s terrific to see the kids here having a good time.”

“We watch a lot of Curious George and we have a lot of the books,” said Leigh Sherwin as she held her son Jarek. “We read Curious George before we go to bed every night.”

“Before we go to sleep,” Jarek added.

Sherwin said she is a fan of the books, having grown up with them.

“My favorite story was the one where Curious George had to go to the hospital because he swallowed a puzzle piece,” she said.

Another grown fan is Selma Fluharty, who was at the party with her son James Pettitt and granddaughter Emma Pettitt, and sang happy birthday to Curious George.

“We have several books about Curious George, we watch the show (on PBS) and we have a Curious George movie, said Jim Lewis, who watched son Noah and daughter Patty coloring while holding 15-month-old son Ethan in his lap.

Lewis and his children were decked out in University of Michigan attire.

“I think that he’s very brave; he jumped off the ship,” said Noah, recalling the first “Curious George” book.

And is Curious George a Michigan fan?

Curious George was played by Jon Bantugan, a Vicksburg High senior who offered to don the costume.

“This is my first time,” he said. “They needed help, and Kelle’s manager couldn’t make it, so I volunteered. It was something for the kids.”

And is he a Curious George fan?

“Big time. Ever since kindergarten.”

Friday afternoon, an 18-wheeler filled with donated supplies left the parking lot of Vicksburg Mall on its way to Houston,... read more