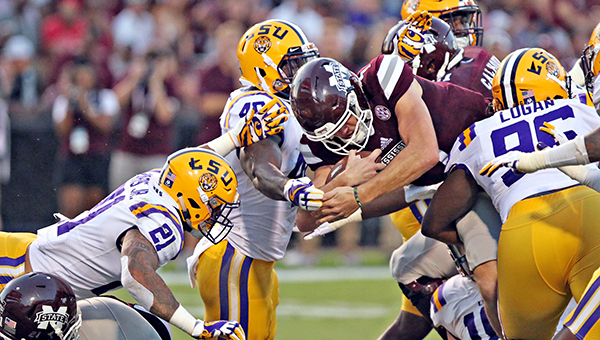 Mississippi State quarterback Nick Fitzgerald fights through a pack of LSU defenders for some extra yardage during Saturday’s game in Starkville. Mississippi State won 37-7 for its biggest margin of victory in the 111-year history of the series. (Walter Frazier/For The Vicksburg Post)

STARKVILLE — Mississippi State and LSU have played each other in football 111 times. Of the 35 times the Bulldogs have walked away the winner, none were as dominant or as impressive as this.

The 30-point margin of victory was Mississippi State’s largest in a series that began in 1896. Its previous best was a 24-point win in 1980. It was also just the third win for the Bulldogs over the Tigers since 1992, first in Starkville since 1999, and was largely thanks to a suffocating defense and the gangly quarterback who is fast becoming a superstar in the Southeastern Conference.

Fitzgerald completed 15 of 23 passes for 180 yards and threw two touchdown passes in the second half as the Bulldogs started to pull away.

He also ran for two scores, including a daring 3-yarder just before halftime. Fitzgerald faked a handoff to running back Aeris Williams, rolled to his left, and when his receivers were covered decided to book it to the end zone. He dove head first, taking a shot to the ribs and getting spun around in the air as he crossed the plane of the goal line to put Mississippi State ahead 17-7 at halftime.

LSU, meanwhile struggled to find any rhythm on offense. Star running back Derrius Guice was held to just 76 rushing yards, and quarterback Danny Etling was 13 of 29 for 137 yards. The Tigers finished with only 270 yards of total offense, and their only touchdown came on a 10-yard run by Darrel Williams in the second quarter.

The Tigers’ next trip into Mississippi State territory didn’t come until the fourth quarter, and ended with a turnover on downs at the 25-yard line.

The U.S. 61 South connector road and the intermodel connector from U.S. 61 North to the Port of Vicksburg top... read more