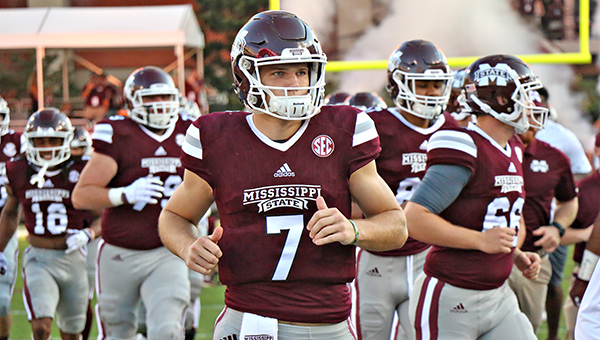 Mississippi State quarterback Nick Fitzgerald jogs onto the field before Saturday’s game against LSU. Fitzgerald accounted for four touchdowns in the Bulldogs’ 37-7 win and was named the SEC Offensive Player of the Week. (Walter Frazier/For The Vicksburg Post)

STARKVILLE — A horde of Mississippi players picked up player of the week honors from their respective conferences on Monday after leading their teams to big wins.

The victory was not only MSU’s largest ever over the Tigers, but was also the largest over a ranked opponent since a 33-0 triumph over No. 12 Vanderbilt in 1942 and propelled the Bulldogs to No. 17 in the latest Associated Press poll.

Fitzgerald earned the third SEC Offensive Player of the Week honor of his career, which ties for the second most in MSU history.

Fitzgerald was an efficient 15-of-23 for 180 yards and two touchdowns. He added 88 rushing yards, averaging 6.3 yards per carry, with two touchdowns. He now leads the SEC with 12 total touchdowns while ranking third nationally behind Oklahoma State’s Mason Rudolph (13) and UCLA’s Josh Rosen (14).

Williams was the SEC’s Offensive Lineman of the Week after recording three knockdowns and paving the way for a Mississippi State rushing attack that totaled 285 yards, the most allowed by LSU since Nov. 14, 2015. The Bulldogs had 465 yards of total offense.

Simmons made it back-to-back honors as the Defensive Lineman of the Week. Against LSU, Simmons collected a career-best seven tackles, including a career-high 1.5 sacks. He also had two quarterback hurries.
Meanwhile, in Conference USA, Southern Miss running back Ito Smith was named the league’s Offensive Player of the Week for the first time following his career night against Louisiana-Monroe.

The senior rushed for a career-high 219 yards and a touchdown on 27 carries as the Golden Eagles won 28-17.
Smith’s 31st career rushing touchdown moved him into fourth place by himself on the school’s all-time list, as he passed both Derrick Nix (1998-2002) and Ben Garry (1974-77). It was also his first 100-yard rushing performance of the season and 17th of his career. It was his first 200-yard game.

And, in the Southwestern Athletic Conference, Alcorn State quarterback Lenorris Footman was named the Offensive Player of the Week. Footman threw for a career-high 424 yards — his previous best was 269 — and three touchdowns in a 34-27 loss to McNeese State. Footman also caught a touchdown pass on a trick play.

Grambling linebacker De’Arius Christmas, a former Warren Central star, was the SWAC’s Defensive Player of the Week. He had eight total tackles, including one for loss, in a 36-21 win over Jackson State. Christmas also forced a fumble that a teammate returned for the game-clinching touchdown late in the fourth quarter.

Win puts St. Al’s season back on the right track

The St. Aloysius Flashes didn’t need to win their intracity showdown with Porter’s Chapel Academy to put their season back... read more