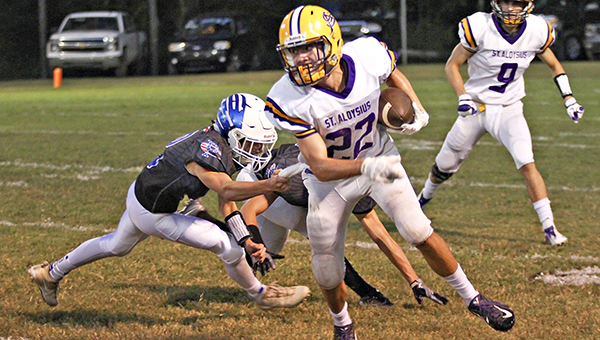 Win puts St. Al’s season back on the right track

They just needed to win a game, any game, and crossing both of those items off in the process was a bonus.

The Flashes snapped a four-game losing streak by beating PCA 39-25 on Friday night. It was good medicine for a talented but struggling team that still harbors playoff aspirations at the midway point of the season.

“The bottom line is getting a win. We could play the Pittsburgh Steelers, but a loss is a loss and a win is a win. It does something for your morale. That’s what we needed was a morale booster, and I think we got it today,” St. Al coach Michael Fields said after the game.

The defense got things started on the game’s first series when Jaylen Whitaker sacked PCA quarterback Tristan Pickering and forced a fumble. Tyrese Burroughs scooped it up and jogged 7 yards to the end zone for a touchdown.

At the end of the first half, Ketrez Brown intercepted a pass at the 15-yard line and went 85 yards the other way for another score that gave the Flashes a 39-12 lead.

Whitaker had two sacks, and in all the Flashes forced four turnovers. PCA did score twice in the fourth quarter, but the game was out of reach by then.

The offense, meanwhile, showed a spark it hadn’t had since scoring 55 points in a pair of preseason scrimmages. St. Al had only scored two touchdowns in its previous two games, but nearly tripled that total by halftime against PCA.

The Flashes finished the game with a modest 280 yards of offense, but had an almost even split of 149 rushing and 131 passing yards. They didn’t attempt a pass in the second half, either, as they tried to bleed the clock with a big lead.

Quarterback Antonio Thompson completed 8 of 14 passes for 131 yards and two touchdowns, with no interceptions. He capped one drive with a 19-yard touchdown pass to Evan Fedell, and then threw a 34-yard TD pass to Ryan Theriot immediately following a PCA turnover. The second touchdown made it 32-12 and was one of three the Flashes scored in the last three minutes of the first half.

Thompson also rushed for 46 yards and a touchdown, and Brown had 118 yards on the ground while taking snaps in the wildcat formation.

“We just opened it up and used the weapons that we had. Throwing the short passes, throwing deep, whatever they gave us, we took it. The second half we tried to run the clock a little bit more and get out of here, and things slowed up on us a little bit,” Fields said. “I knew things would come around for us. We played a pretty good, tough schedule early and the competition is going to come back to us a little bit.”

Now the Flashes head into the second half of the season with a win under their belt and a little bit of momentum. They’re still in the thick of the District 3-AAA championship race, with three of their last five games within the league — including one with first-place Riverfield in the season finale Oct. 20 — and have shown in the past couple of years that they’re capable of making a late-season push.

Since joining the MAIS in 2015, St. Al is 2-16 in games played in August and September, and 7-2 in October.
Up next is another district game this Friday, at home against Park Place Christian (4-1). Fields expected the win over PCA to go a long way toward propelling his team into that game, and the second half of the season.

“It’s going to help our focus,” Fields said. “We’re probably going to have a more spirited practice next week, and the guys know we have a big game against Park Place coming to our place. I don’t think they’ve faced the teams we’ve faced. I think we’ll be ready to play.”

Mayor George Flaggs Jr. will meet with Vicksburg residents Oct. 5 at 5:30 p.m. at the City Hall Annex to... read more