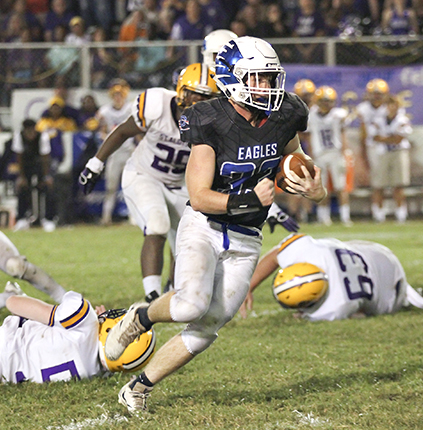 The possibilities and permutations of the Mississippi Association of Independent Schools’ football playoff wild card system make it almost impossible to do more than take a wild guess at who’s in and who’s out at this point in the season.

There are a couple of things that Porter’s Chapel Academy knows for certain, however — that the wild card is its only road to the postseason, and it needs to win a lot in the next month to get there.

“I think we’re going to have to get to 6-4 and win four of the next five to get in. Maybe 5-5 gets us there,” Purvis said. “We’ve just got to take it one week at a time and win each game as it comes.”

The Eagles’ record currently sits at 2-3 as it takes a two-hour road trip this week to Farmerville, La., to play Union Christian (1-4). It’s the first of three games in the next four weeks for PCA against teams in Class A or AA. That won’t help its power point rating as much as playing bigger schools, but right now wins are the goal.

“I think we’ll be OK. I think our guys will be motivated,” Purvis said. “We’ve got half a season left. We’ve got a good stretch of games coming up that we match up well against. We’ve still got a playoff berth to fight for and the wild card race, and we need to go get our power points.”

The Eagles also need to get off to a good start. All five of their games have essentially been decided by halftime, one way or the other.

In their two wins, the Eagles have outscored their opponents 57-0. In their three losses, they’ve been outscored 85-12.

The key to getting a good start, Purvis added, is avoiding ill-timed penalties and mistakes.

In a 39-25 loss to St. Aloysius last week, the Eagles committed three turnovers in the first half and had two of them returned for touchdowns. An offsides penalty on fourth-and-5 from the 10-yard line gave St. Al a first down and led to a touchdown on the next play, and a couple of penalties on the offense negated positive plays.
Eliminating those mental mistakes is the mark of a consistently good team and, Purvis said, something the Eagles must do if they want to reach that level.

“It comes down to discipline,” he said. “Lack of focus and discipline are the mistakes we’re making. When we play disciplined and focused, we play good. When we’ve lost it, every single time it seems to cost us huge.”

Even backyard sports are serious to someone

This is the time of year to wax poetic about football and the changing of the seasons, or break down... read more