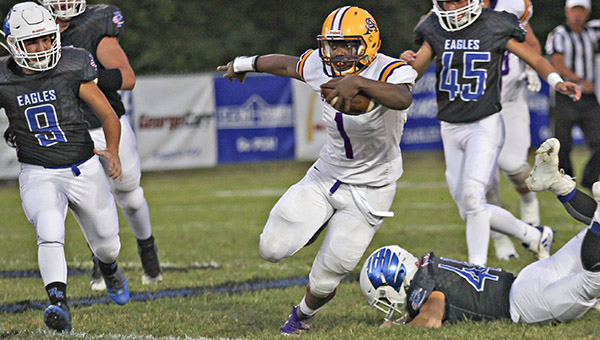 This is familiar territory for St. Aloysius.

The Flashes’ (1-4, 1-1 District 3-AAA) win over Porter’s Chapel Academy last week kept their title hopes alive heading into another key district game this Friday night at home against Park Place Christian (4-1, 0-0). Win that one, and they’ll finish the season with back-to-back games in October against Hillcrest Christian and Riverfield Academy with a chance to earn a share of the district title for the third year in a row.

It’s not the route they would have preferred, coach Michael Fields said, but at least it is a clear path they have control over.

“That’s all you can ask for, is to be able to control your destiny and that’s what we’ve got,” Fields said.
The remaining district schedule is favorable for St. Al. Hillcrest has not won a game yet and Riverfield is in first place, meaning St. Al can go into the season finale on Oct. 20 with an opportunity to win that head-to-head matchup and earn at least a share of first place.

St. Al also has non-district games left against Manchester Academy (4-1) and Cathedral (4-1).
Before then, St. Al will play a Park Place team that beat up on a weak schedule early — its first four opponents had a combined record of 3-17 — before losing to Winona Christian last week in its first game against a team with a winning record.

“Those three district games are very important to us having any kind of opportunity to make the playoffs,” Fields said.

St. Al had a breakout performance last week against Porter’s Chapel. After scoring only 41 points in their first four games, the Flashes scored 39 in the first half.

Two of those were defensive touchdowns, and three scores came in the last three minutes of the half. The offense had eight plays of 10 yards or more in the first half, showcasing the type of explosiveness it displayed during two preseason games but not since. That’s also something Fields said the Flashes need to show again vs. a Park Place squad that has a size advantage on the line.

“We definitely have a speed advantage, but they’re big up front. We’re going to have to be patient and not let them beat us to big plays,” Fields said.

Fields added that the Flashes also need to show they can handle success. After rolling to wins in their preseason scrimmage and jamboree, they fell flat in the early part of the season. Now, after finally winning again, they must keep the momentum going rather than fall back in what is essentially a playoff game.

“That’s the only thing about playing a rival in the middle of the season. We’ll get a check on our maturity this week and see how we handle it,” Fields said.

The start of region play is symbolic for Mississippi’s high school football teams. Whatever has happened in the first month,... read more