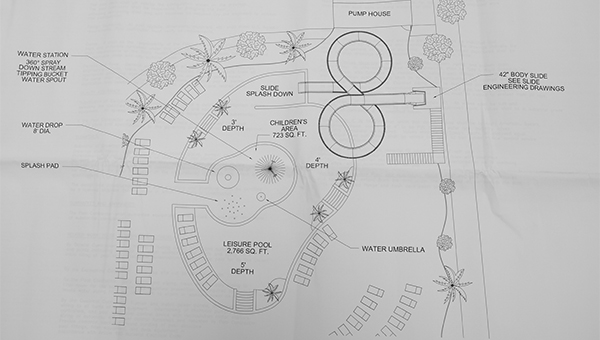 A representative with Vicksburg Hotel LLC said the company will have separate openings for portions of the proposed Margaritaville Resort at the Portofino Hotel on Mulberry Street.

Company officials in May announced an April 2018 opening for the resort, but Cono Carano, a developer who is affiliated with Margaritaville Biloxi and a partner with Vicksburg Hotel, said the lower half of the resort containing the restaurants and the family entertainment center will open first, with the hotel and the pool area opening together in the summer.

The family entertainment center will include the latest in video and electronic games and other activities, he said in August.

“The site selection committee has approved the plans,” he said. “They are supposed to come in next week and pull the permits for it. They will need a building permit and a grading permit.”

According to the plans, the pool with a waterslide will be built on the top level of the adjacent parking deck just north of the hotel, and will feature different depths of 3, 4 and 5 feet with “splashdown” area for the slide, and a splash pad and children’s area in the center of the pool. The waterslide takes people through a figure 8 as they move toward the pool.

Carana said construction of the pool is expected to start in November. Grey-Lewis said the company will need a grading permit because it will have to dig up the lower level under the deck to install the pipes for the pool.

Work has been underway at the resort site as workers have renovated the interior and exterior of the family entertainment center on the west side of Levee Street.

“We painted the lower half, fixing up the stucco and some of the other parts that were damaged over the years when we were shut down,” Carano said. “The inside is pretty much ready to go; we’re waiting for the carpet to be delivered and a few more finishing touches, and the games and the kitchen equipment, so that lower portion will go faster than you think.”

Vicksburg Hotel acquired the former Grand Station Hotel and Casino property in 2014, and renamed it Portofino. The hotel closed its doors in July 21, 2015, and has not reopened.