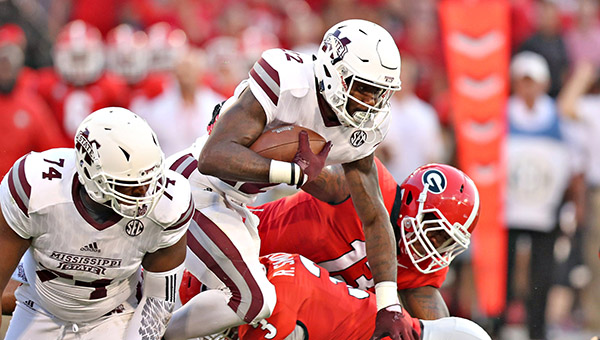 Mississippi State enjoyed a big week following a 30-point win over LSU. The Bulldogs rocketed up to No. 17 in the Associated Press poll and generated some buzz as a contender for the SEC West championship.

In hindsight, MSU quarterback Nick Fitzgerald said, the Bulldogs probably let it go to their head.

All of the momentum they generated the week prior collapsed in a few hours of wretched football Saturday night against No. 7 Georgia. Mississippi State was dominated in every facet of the game and blown out 31-3.
It was only the fifth time since Dan Mullen took over as MSU’s coach in 2009 that the team has failed to score a touchdown.

“I think we came out with a good attitude. We played hard, there’s no doubt about that. We didn’t go out there with a bad attitude, bad mindset. We just have to execute,” Fitzgerald said. “I saw it throughout the week at practice, having to redo a lot of plays, a lot of stuff, missing a block, it rolled over into the game.”

Mississippi State (3-1, 1-1 SEC) had 177 rushing yards, but only 103 passing. Fitzgerald, who accounted for four touchdowns and was the SEC Offensive Player of the Week following the 37-7 win over LSU, was 14-of-29 passing for 83 yards, no touchdowns and two interceptions. He ran for 47 yards on 10 carries.

Georgia, meanwhile, rushed for 203 yards and got an efficient passing performance from freshman quarterback Jake Fromm.

Fromm was 9-of-12 for 201 yards and two touchdowns, including a 59-yard touchdown pass to Terry Godwin on a flea flicker on the home Bulldogs’ first play of the game.

Like Fitzgerald, MSU linebacker Braxton Hoyett said the Bulldogs from Mississippi seemed out of sync for most of the week.

Mississippi State remained in the AP’s latest Top 25 poll, although just barely. They dropped seven spots to No. 24 and will play another tough SEC road game at No. 13 Auburn this Saturday.

A few days after finishing second at the MAIS Overall state meet, the St. Aloysius swim team returned to the... read more