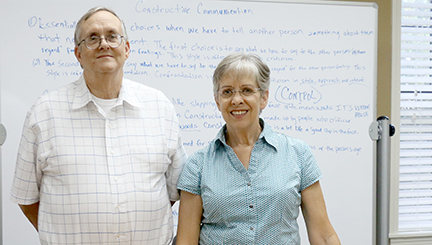 Randy Gay, the executive director of the Vicksburg Child and Parent Center and Susan Morang, mentor coordinator for the CAP Center pose for a picture in the facility’s conference room at 3530 A Manor Dr. The CAP Center has scheduled a mentoring training session for anyone in the community interested in becoming a mentor. (Terri Cowart Frazier•The Vicksburg Post)

The impact of a mentor can be transformative. It can sometimes be the difference in a child succeeding or failing.

The Vicksburg Child and Parent Center is aware of how life-changing mentoring can be, and in 2003 started a mentoring program.

In an effort to continue this outreach into the community, the CAP Center will hold a mentoring training session from 10 a.m. to 1 p.m. Friday, at 3530 A Manor Dr. for those interested in becoming a mentor.

Once the training is complete, volunteers will then be matched with children who may need some kind of encouragement or support, mentor coordinator Susan Morang said

The role of a mentor is multifaceted, Morang said, but the ultimate goal is to consistently show interest in the child.

“Mentors can serve as a positive role model, provide encouragement, friendship, guidance, help the child realize his or her potential and support the efforts of teachers and parents,” Morang said.

Counselors and teachers typically identify children who could benefit from having a mentor, Morang said, as well as those working with the CAP Center.

“My co-workers also often identify a child from their case loads who would benefit,” Morang said.

The time commitment a mentor can typically expect to spend with their mentee is one hour a week, Morang said, or half an hour two times a week for younger students.

Visitation is held at school during the school day and it is best to try and work around the child’s schedule, so as not to take him or her out of their favorite class.

“Some mentors will show up at the beginning of the day before school begins so they can talk and get to know each other,” Morang said, and added that the personalities of the mentor and mentee will dictate what the pair does.

“I had one mentor who taught her mentee how to knit. I also had one lady who just basically helped the child get organized,” Morang said, explaining that this particular mentor helped the child organized her backpack and taught the child how to write down school assignments in a notebook.

Mentors can help their mentee with schoolwork, Morang said, but it is not required, since a mentor is different from a tutor.

During Friday’s training program, Morang said she is planning to have some current mentors on hand to share some of their experiences with the group.

“We will also go over some rules and regulations and expectations,” she said.

For those interested in participating in the program, requirements include being at least 21 years of age, having transportation, passing a reference and background check, committing to 60 minutes a week with the child and attending the occasional training/meetings.

“Mentors are good listeners, people who care and people from all economic, ethnic, and educational backgrounds — ordinary people, like you,” Morang said.

PCA students have pet dragon to help with lessons