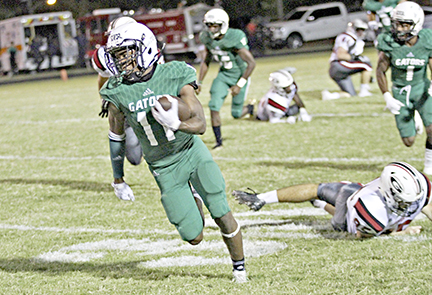 At the halfway point of the 2017 football season, there’s no denying that the Vicksburg Gators are in a deep hole that they didn’t expect to be in. To get out, the trick might be buying into the old coaches’ cliché of taking things one game at a time.

The Gators (0-5, 0-1 Region 2-5A) are looking for any marker of success after losing their first five games, and a second-half push could start by beating Neshoba Central (3-3, 1-0) on the road on Friday night.

“Once we get that one, we’ll be able to climb that ladder and get that momentum and get out of the slump. We just have to get to the point of getting that one, that first one,” Vicksburg coach Lorenzo Breland said. “We’ve got another big road test this week against Neshoba, so we’re just going to be doing what we can to get the win.”

Vicksburg’s defense is allowing 29.6 points a game, but its real problems have stemmed from turnovers and miscues by the offense and special teams. In their last two games the Gators have committed six turnovers, one of which was returned for a touchdown, and have gained only 300 yards of total offense.

In last week’s 30-7 loss to Germantown in the Region 2-5A opener, the Gators also fumbled three punt snaps, had a field goal blocked, and committed 14 penalties.

“Any time you’re having your own penalties, that makes it tough. Especially when the offense is already struggling trying to get something going,” Breland said.

With such a dreary season unfolding, Breland is trying to highlight as many positives as he could. Among them was a 90-yard kickoff return touchdown by Tyrese Wolfe against Germantown and another long return in the third quarter.

“We saw some good things offensively and we had some bright spots on special teams with two big returns, so we just have to build off of that and try to get this offense rolling and get some points on the board,” Breland said.

He and the Gators are hoping that happens this week against a Neshoba Central team that has been up and down this season. The Rockets won their first two games, lost the next three, and then squeaked past Holmes County Central 20-19 in last week’s region opener.

The Rockets are led by sophomore running back Tyler Mathis (128 carries, 690 yards, four touchdowns) and quarterback Austin Day (98 carries, 436 yards, five touchdowns). The rest of the team has a combined total of 26 rushing attempts, and they’ve only attempted 25 passes.

“They’re a physical team. Downhill a lot, good defense. It’s going to come down to us executing and protecting the football,” Breland said.

Vicksburg won last year’s meeting at Memorial Stadium, 35-7, which is something Breland hopes his senior-laden team can draw on. Mostly, though, he said the Gators just need to put together one solid effort for four consecutive quarters.

They played well in the first half of losses to Oxford, Clinton and Warren Central, and in the second half against Columbus. In the other halves of those games, however, they were outscored 94-6. The loss to Germantown was bad throughout.

One complete game, however, could still send the Gators’ season in the right direction.

“We’re trying to get everybody to wrap their head around playing a complete game,” Breland said. “Those first three games, we played good in the first half and really didn’t play good in the second half. Then after that, we get into a lot of penalties, a lot of mistakes, a lot of turnovers. We can’t turn the ball over and get a win.”

Northwest Rankin ran 49 offensive plays last Friday against Warren Central. On 44 of them, they gained a total of... read more