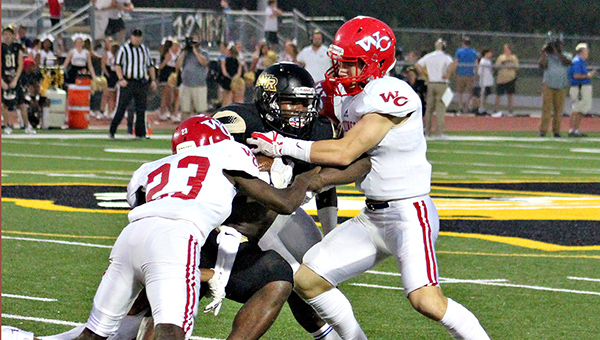 Northwest Rankin ran 49 offensive plays last Friday against Warren Central. On 44 of them, they gained a total of 169 yards, or less than four per play.

It’s the other five that will haunt Warren Central for the next six weeks.

Northwest Rankin scored on plays covering 61, 90, 51, 70 and 25 yards in its 38-31 win over the Vikings, who had an opportunity to either break up passes or stop running backs for minimal yardage on all of them. Two of the scores, including the game-winner in the final minute, came on third-and-long situations.

It was an uncharacteristically shaky performance by a Warren Central defense that typically ranks among Mississippi’s best. The 38 points is the most it’s allowed since a 45-42 win over Pearl in Week 2 of the 2015 season, and the loss means they’ll have to play from behind in a highly competitive playoff race in Region 2-6A.

“I thought we handled adversity well. There were a couple of times where we got backed up and found ways to stay in the ballgame. On that end, we did some really good things. But the explosive plays in a tight ballgame, you can’t do that,” Warren Central coach Josh Morgan said.

In its first four games, Warren Central (3-2, 0-1 Region 2-6A) had only allowed 21 points in the first half and trailed for a total of 10 minutes and 55 seconds. The only quarter it trailed at the end of was the final one in its previous loss to Pearl.

The defensive breakdowns, however, had the Vikings playing catch up all night against Northwest Rankin, and they started early.

On the game’s opening series, Northwest quarterback Jamari Jones heaved a deep ball toward Jarrian Jones, who was in single coverage about 30 yards down the field against WC defensive back Jalen Allen. Allen locked onto the ball, but as he leaped to knock it away it sailed over his outstretched hand and into the hands of Jones. As Allen lost his balance and fell down, Jones ran to the end zone for a 61-yard touchdown.

A nearly identical play with a different defensive back resulted in a 51-yard TD reception by Montel Gladney, just two plays after Warren Central had tied the game at 14 with a minute left in the first half. A similar mistake by yet another defensive back allowed Gladney to catch the 25-yard game-winner with 48 seconds left in the fourth quarter.

It wasn’t just coverage mistakes that cost the Vikings, though. Late in the first quarter, Northwest Rankin running back Dee Baker appeared to be bottled up in the backfield after taking a handoff at his own 10-yard line. He shuffled his feet for a second, juked to his left, found an opening and went all the way to the end zone for a 90-yard touchdown and a 14-7 lead.

Midway through the third quarter, Warren Central tied it at 24 on a 1-yard run by Corey Wilson and put Northwest in a third-and-10 situation at its own 30. Jones threw a swing pass to running back Cameron Carroll, who broke two tackles before reaching the first down marker. He then outran the rest of the defense up the left sideline for a 70-yard touchdown.

“On that particular play, he broke containment and we missed a sack. The DB was there and got turned around and lost the receiver,” Morgan said of the first long touchdown pass. “Then the touchdown that put them ahead, our DB had good position and lost the receiver. The quarterback made a really good play. We had a good guy in a good position, and he just stopped moving his feet. But the two long runs are something we’re going to look back on and really be disappointed in.”

Almost as disappointed as letting a key game in the region slip away.

Warren Central and Northwest Rankin (4-1, 1-0) are among six teams in Region 2-6A that are expected to compete for four playoff spots, making each of their head-to-head matchups doubly important.

After losing to the Cougars in the annual region opener for the first time since 2011, the Vikings are in the unfamiliar territory of playing from behind. They’ll likely need to score wins against Clinton (2-3, 0-1) and Provine (4-1, 0-1) to secure a playoff berth, as well as Starkville (5-1, 1-0) and perennial nemesis Madison Central (4-1, 1-0) to have a shot at the region title.

“It’s the first game of the district. We understand what type of game this was, and there’s no sense in backing down from it. What we’ve got to do is regroup and realign ourselves, and hunker down. It’s just going to put a lot more pressure on us starting with the next week,” Morgan said.

The Vikings play at Madison Central on Oct. 6. Before that, they’ll get a chance to regroup against Greenville (1-4, 1-0), which is in the unusual position of looking down on Warren Central in the standings following its 42-34 win over Murrah last week.

The game will be at WC, but Morgan said just getting back on the field and putting a bad game behind them is more important this week.

“It’s always good being at home, but I’m sure we’ll be anxious to get back on the field and get this taste out of our mouth,” Morgan said.

A weekly recap of the performances of players from Vicksburg-area high schools in college football and NFL games over the... read more