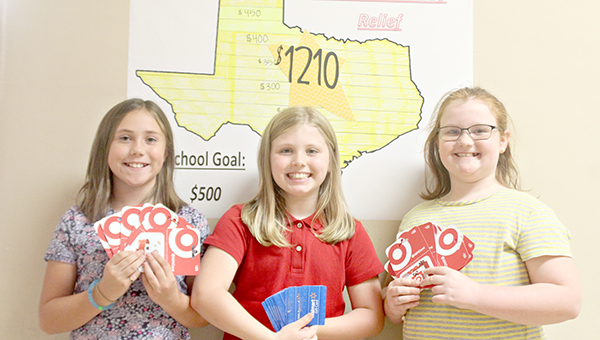 Students at Bowmar Avenue Elementary showed the power of working together and setting goals by raising money to help the victims of Hurricane Harvey.

The students originally set out to raise $500 to assist the community of Vidor, Texas, but quickly surpassed their goal by raising $1,200. The money was used to purchase 48 $25 gift cards to Walmart and Target that were mailed to Texas Monday.

“Seeing a need, I went and selected Vidor, Texas,” said Dana Tankersley, who works with gifted and talented students at Bowmar and who helped organize the drive. “I knew it was a much smaller community and I was reading things that a lot of the smaller communities weren’t getting the help like Houston was or Beaumont or Port Arthur. So I intentionally picked a place that was much smaller.”

Tankersley made contact with a representative from the Vidor school system and chose to use the money to purchase gift cards because it was determined that would best meet the community’s needs.

Students, who were encouraged to make small sacrifices in their own lives in order to help those in need, raised the majority of the money.

“We encouraged the children to do chores, not to just go home and say mom I need money,” Tankersley said. “We had kids give up birthday money. We encouraged them to give up afternoon stops at Dairy Queen or Sonic or whatever. Tell mom we won’t stop for ice cream today, we’ll give that money to Hurricane Harvey.”

Fourth graders Mia Grace Owens, Gretchen Wolf and Sydney Sullivan decided to go the extra mile, though and spent a Saturday walking their neighborhoods collecting donations. Owens collected $200 for the relief fund and Wolf and Sullivan worked together to collect $246.

“We would say ‘hi we’re hurricane helpers and we need some money to give to our school to help build some houses and help people in need in Texas,” Wolf said. “It made me feel happy to be able to help them and to make them feel better.”

Tankersley said the relief efforts fit in with the Leader in Me program and the value of setting a goal and working to meet or exceed the goal.

“We set goals for everything and we try to see if we can reach that goal,” she said. “That in itself, meeting the goal, is tremendous. Surpassing it like we did just gives me goose bumps.”

Warren Central teacher Thomas Mayfield is out to make a difference in students’ lives and introduce young men to the... read more