Heritage on display during preservation weekend 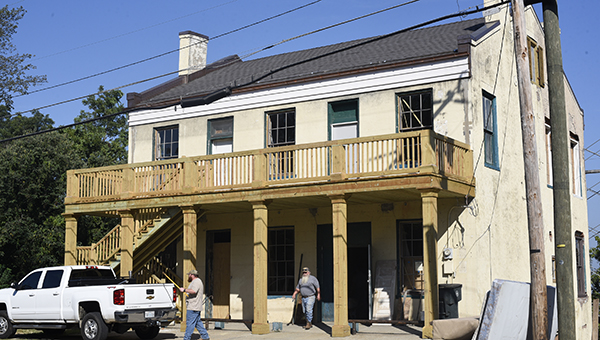 Historic preservation will be the focus Saturday and Sunday when Vicksburg holds its first Preservation Celebration Weekend, featuring tours of a recently restored home, banquets and dance, a ballet and a Sunday afternoon concert.

The two-day event is co-sponsored by the Vicksburg Foundation for Historic Preservation and the Heritage Guild of Vicksburg and Warren County, and will celebrate the restoration of the former Fleckstein-Coccaro grocery at 1501 Martin Luther King Blvd., by its owners, Carol McMillin and her husband, Dr. Lamar McMillin, a retired physician.

The building is across the street from the Kuhn Memorial Hospital property. The home is also known as Catherine’s Palace, for Catherine Coccaro, who lived in the home.

“It’s kind of focusing on preserving our history and our architecture and our stories,” Carol McMillin said.

The home, she said, was built in 1839 by Christian Fleckstein who came to Vicksburg from Bavaria. It was built to have a grocery store on the main floor with living quarters on the second.

The home’s place in local history is more than its age. It is said that Gen. Ulysses Grant rode past the home when Union troops entered the city after Vicksburg was surrendered.

A painting by artist Jerry McWilliams depicting Grant riding by the house will be displayed during the weekend.

The house was later bought by Joseph Coccaro, an Italian immigrant, who also ran a grocery store with his wife Catherine.

Lamar McMillin said Joseph Coccaro was living in Vicksburg with relatives and went to Italy to see other relatives.

He met and married Catherine during that visit, and the couple returned to Vicksburg.

“He had to borrow money from a relative because he only had enough money to get passage back for one person,” he said.

The house, Carol McMillin said, was the only home the couple ever had.

“Catherine lived there until 1965,” she said. “She was very proud of her home, the way it was furnished and the way it was taken care of. Her grandchildren called it ‘Catherine’s Palace’ for the way she took care of it.”

The two-day celebration begins Saturday with an open house and tour of the home from 9 a.m. to 3:30 p.m., followed at 4 p.m. by a ballet at the Vicksburg Convention Center. Performed by students from the River Pointe Dance Academy, the ballet will recall the history of Vicksburg and the Mississippi River.

A banquet follows at 6:30 p.m. with Walt Grayson as the featured speaker. Historian Dr. George W. McDaniel, the retired director of Drayton Hall in Charleston, S.C., will also speak. The dinner is followed by a dance with music by “The Chill.” The cost of the dinner is $15 per person.

A Greenville native, Grayson is a writer and broadcaster who hosts the show “Look Around Mississippi,” Fridays on WLBT, and is the writer and host of WLPB’s “Mississippi Roads.” He also wrote the text for “Jackson: The Good Life,” a book on the sites and sounds of Mississippi’s capital city.

An ecumenical service will be held Oct. 1 at 10:30 a.m. at the Church of the Holy Trinity with the Rev. Beth Palmer officiating, and the Vicksburg Chamber Choir and Vicksburg Orchestral Society will perform in concert at the convention center from 3 to 4:30 p.m.

The performance will include the song “Praise to the God of Earth and Heaven,” written in Vicksburg in 1982 by David Stokes.

The Fleckstein-Coccaro house will be blessed at a 5 p.m. ceremony that will include a performance by the Vicksburg Brass Band.

The events will end at 7 p.m. Sunday with a dinner featuring McDaniel as the featured speaker talking about building bridges through history and preservation.

McDaniel has a Ph.D. in history from Duke University and is president of McDaniel Consulting, which helps museums and organizations with planning, staff and board development, fundraising, programs and community engagement.

He is the director emeritus of Drayton Hall, a historic site in Charleston, S.C.

McDaniel’s son, George H. McDaniel, a graduate student at Ole Miss, will also give a presentation on William Faulkner. Charge for the dinner is $15 per person.

The dinner will be followed by a concert and dance with Nickolas and Julie Blake performing.