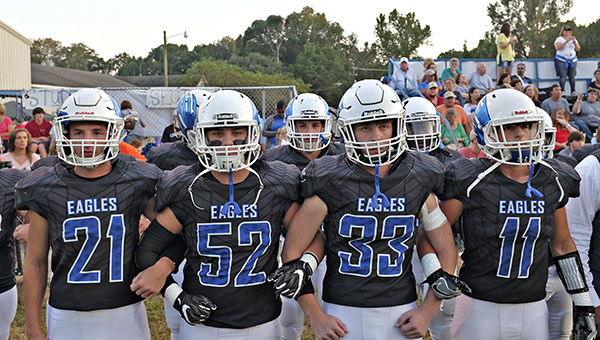 Eagles try to push aside distractions for homecoming game vs. Claiborne

When Porter’s Chapel Academy lost to crosstown rival St. Aloysius two weeks ago, it was a disappointing defeat that set the course for the rest of the Eagles’ season. In one respect, however, it did have a positive effect.

It was good training for this week.

PCA (3-3) will face Claiborne Christian (3-2) in its homecoming game Friday at 7 p.m. Homecoming week is full of distractions and sideshows leading up to the game, but PCA coach Blake Purvis feels like his team has already been through that once.

“I think two weeks ago prepared us very well for this week. I don’t think we could have more distractions than we had for the St. Al game. I think our guys will handle it very well,” Purvis said.

Porter’s Chapel is handling a lot of things well these days. It has already won more games this season than it did in the previous two combined, and can match its win total from 2014-16 with a victory this Friday.

PCA is averaging 217.5 rushing yards per game. Running back Glenn Alan Kittrell leads the team with 482 rushing yards and seven touchdowns, while Carter White has 371 yards and four TDs. Three different backs have had 100-yard games.

Purvis said that while the backs have played well, a lot of the credit for the strong running game, goes to the offensive line of McKinley Skipper, Brandon Thompson, Cody Lyons, Markel Harris, Markevious Harris and Bradley Collins.

“Our offensive line is vastly improved from last year. Last week, we played our fourth game with the same O-line. Week 1 we had some injuries, Week 2 we moved some people around. Since Week 3, we’ve played with the same O-line and they’re gelling,” Purvis said. “Our ball carriers are doing a great job, but it definitely starts with those five guys up front.”

The defense, led by the lineman Skipper and linebacker Michael Brewer, has posted two shutouts. Brewer has 47 tackles, while Skipper has 46 to go along with 12 tackles for loss, three sacks and four forced fumbles.
The resurgence has put PCA in the hunt for a wild card berth in Class AAA.

“I’m very pleased. It’s AAA, we’ve moved up, and sitting here with a .500 record halfway through the season we’re in a good position,” Purvis said. “I think our playoff chances are very much alive, and if we take care of business down the stretch we’ll be in a good position come November.”

PCA’s playoff hopes hinge on the MAIS’ power points formula, which awards teams points for both its own victories and those of opponents, and awards bonuses for victories and playing higher-classification teams. Each team’s point total is then averaged across the number of games it has played. The averages are used to select wild card teams and seed the 16-team bracket.

A win over Class A Claiborne Christian won’t be as beneficial to the Eagles as one against a Class AAA or AAAA team, but it still would help. Purvis estimates that PCA will need around 140 power points to get into the playoffs, and currently has 77. Two more wins might get them there. Three more definitely should. Missing an opportunity like this week’s, to pick up one of those victories at home, will not.

“This game could help us out huge. We don’t get any bonus points for playing them because they’re Class A, but we get 18 or 19 if we beat them,” Purvis said. “If we go 5-5, we should be sitting around 14.8 power points (average) and 12 usually gets you in. If we go 6-4 we’ll definitely be in. Seven-and-three would be awesome. So I think we’re in good shape.”

Right when the St. Aloysius Flashes have built some momentum, salvaged their playoff hopes and started to turn an eye... read more