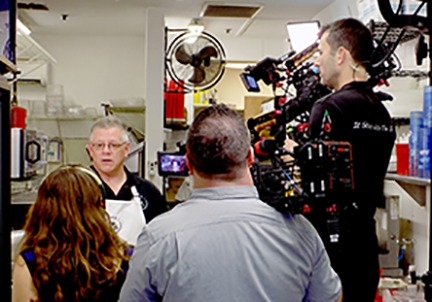 The memory of restaurateur Rowdy Nosser comes to life Tuesday during the broadcast of the Travel Channel’s, “Delicious Destinations with Andrew Zimmer” featuring a segment on Rowdy’s Mississippi Mud Pie, the popular dessert at Rowdy’s Family Restaurant.

The program will be broadcast at 8 p.m. Tuesday and dedicated to Rowdy, said Regan Nosser, his son, who is now the owner/operator of Rowdy’s and Taco Casa.

“Oct.3, we’re having a viewing party here by invitation; it’s usually based around family and some of our regular customers,” Regan Nosser said.

He said the program, which was filmed March 8, features the Mississippi Mud Pie and will show scenes of Rowdy making the pie and interviews with guests who dined at the restaurant when the show was filmed.

“The Travel Channel has agreed to dedicate the show; and at the end of the show will do a memorial to Rowdy,” he said.

In an Aug. 12 interview, Rowdy Nosser said he welcomed filming the program because of the opportunity to feature Vicksburg.

“That’s where I was headed when I had this opportunity, to take the focus off me and to give something back to my hometown,” he said.

“Life right now doesn’t get better; it’s about the dream, but also about Vicksburg. How often do you get to put your whole town on the map?”

Mississippi mud pie, he said, is an example of what makes Vicksburg special.

“It’s the unique restaurants — the local restaurants are really what makes this town special when people come into Vicksburg. Not just Rowdy’s.”

Rowdy Nosser died Sept. 3. Since then, his son has taken the reins of the company and is learning the business.

“Business has been good,” Regan Nosser said. “Everything’s running smoothly, our consistent customers are here and we have new customers. I’m trying to bring more life into the business. Rowdy’s and Taco Casa are running smoothly. It’s been a big learning step for me. I’m consistently going.

“It’s a lot of different moving pieces to learn. You’ve got the business aspect, the office aspect, got the kitchen and the floor, and you’ve got to make your customers happy. And I’ve got Rowdy’s and Taco Casa.”

He said the employees have been doing a good job, adding, “They’ve been really helpful to me and understanding. All the employees are so helpful in helping me learn and really get a grasp of the business, I’m starting to feel like I’m on my feet.”

Fabian Armstead was arrested by Vicksburg Police and charged with attempted murder and shooting into an occupied vehicle following an... read more