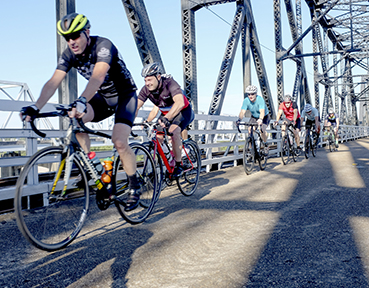 Bricks and Spokes rolls through city

Starting on South Street, the ride took cyclists across the Old Mississippi River Bridge into Louisiana and through the Vicksburg National Military Park. Participants had the choice between a 10, 30, 50 or 62-mile course with the 30-mile course going through a portion of VNMP and the 50 and 62-miles courses going through the entire park.

“Unbelievable, you can’t beat that terrain,” Stuart Keyes, who came from Monroe, La. for the 62-mile ride, said of Bricks and Spokes. “The military park is as good a ride as anywhere in the south. It is hilly, it is historic, you don’t have to worry about cars flying by you because everybody in the park is taking it easy and enjoying their day so it is safe. We love coming here and riding.”

The military park was included in the ride this year thanks to a partnership between Bricks and Spokes and Bike Your Park Day, a national program organized by the Adventure Cycling Association.

Bricks and Spokes also give cyclist the unique chance to ride across the Old Mississippi River Bridge into Louisiana before returning to Mississippi.

“It is an unbelievable feeling,” Keyes said of riding across the bridge. “When we were coming back across and you had chance to see the wind blowing, the flag flying, the barges going underneath, it is pretty neat. How many times do you ride in two states in one day?”

The ride is not timed and attracts riders of all ages and abilities. Riders weren’t even required to own their own bikes, as Battlefield Bicycles was there renting bikes to participants who needed one.

“Everything has gone great. No problems at all. The weather has been beautiful and I went over on the Louisiana side and everybody was having fun,” Kim Hopkins, the executive director of Vicksburg Main Street, said. “It brings in people from all over. We’ve got people from Louisiana, Texas, Arkansas and all of Mississippi. It brings tourist and participants in. They come in, stay in hotels, shop and dine. It brings a lot of money to Vicksburg.”

Hopkins said the 30 and 50-mile rides were the most popular this year although plenty of cyclists chose to participate in the 62-mile course.

“Sixty-two miles is a good ride,” Tracey Brooks, from Monroe, La., said. “We are seasoned cyclist so if we do something shorter, we wouldn’t be as motivated to drive over. Sixty-miles is a great workout. It is roughly a three-hour ride.

“(The hills in the military park) are as challenging as anything here in the south. We’ve been up in Colorado and the hills there are just longer, but here they are just as steep and just as hard.”

The Board of Mayor and Aldermen are expected to take action Monday on two items that could allow people to... read more