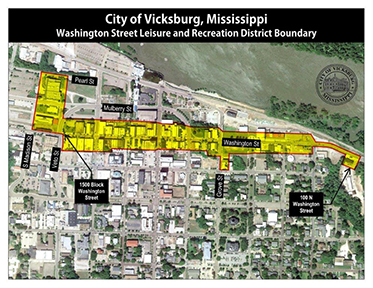 The Board of Mayor and Aldermen are expected to take action Monday on two items that could allow people to drink alcoholic beverages outside downtown restaurants and clubs.

Mayor George Flaggs Jr. said he is introducing an ordinance Monday establishing a leisure and recreation district running the length of Washington Street from the Klondyke, 100 North Washington St., south to Veto Street and including Mulberry Street and a section of Madison Street. If approved, the ordinance would go into effect Nov. 2.

Besides the Klondyke, the proposed district includes Rusty’s Riverfront Grill, Mousour’s at the Biscuit Company, 10 South, Roca and Cocktails101.

“The only thing we cut out of the district was LD’s (Kitchen), because it is close to the (Catfish Row) park (on Levee Street),” he said.

Flaggs said the board will also consider a contract for security guard services to operate in the district during the time open containers are allowed, which according to the proposed ordinance will be from 10 a.m. to 11 p.m. Monday through Saturday and from 11 a.m. to 11 p.m. Sunday.

The security guard service will start the same day the district officially goes into effect.

Flaggs has said one reason to hire the security company is to free up Vicksburg police officers to patrol other areas of the city.

Vicksburg is one of 14 cities in the state allowed to have a “leisure and recreation district” in the city that allows people to walk out of a restaurant or bar carrying an open container in a designated part of the city as a way to attract tourism and more restaurants downtown.

The special district is a provision of the state’s alcohol beverage regulations that were passed during the 2016 session of the Legislature.

Flaggs said two of the cities, Clinton and Hattiesburg, have already established their districts.

Under the ordinance, people buying an alcohol at a local business can leave the business with one beverage, provided it is in a 16-ounce plastic cup bearing the name and/or logo of the business.

Customers at a restaurant will be allowed to drink a beverage outside at a table that is on the premises.

“We have vetted the bill and looked at how the other cities that have this are doing it,” South Ward Alderman Alex Monsour said. “We are going to do this right. We will have the security downtown and it will overlap so that we make sure everything is handled properly and the law is enforced.

“The mayor and I have said we’re going to watch it, and if it doesn’t work, we’ll pull it.”

North Ward Alderman Michael Mayfield declined to comment on the ordinance, saying he wanted to get more information on it.

Real estate developer takes up issue with supervisors on taxes

The tax abatement program to encourage development in downtown Vicksburg is a good one, but according to one developer, she... read more