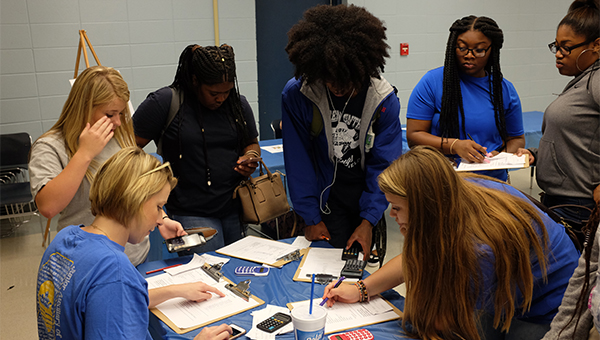 Finding a place to live, buying groceries, and paying other bills means the money you earn is quickly spent supporting you and your children.

That was the lesson taught to high school students during the Game of Life presented by the Junior Auxiliary Friday at Hinds Community College’s Vicksburg Campus.

Students from River City Early College and the Vicksburg High, Warren Central and Porter’s Chapel vocational tech programs participated in the game. Each student was randomly assigned a career ranging from a doctor making $150,000 a year to a cashier making $20,000 and either one or two children.

They then had to use their salary and make purchasing decisions.

“They go around to these different stations and they make decisions,” Holly Porter, the Game of Life project chair for Junior Auxiliary, said. “Do I want to drive a car, a truck and SUV? They all vary in price. They can decide if they want to live in a house or a trailer. Again they vary in price. Depending on everything, they write checks for different amounts at the different stations.”

Some of the purchases are mandatory including housing — where they have a choice of a trailer, apartment or house — groceries, childcare and insurance. Other purchases, such as a car, a cell phone or visiting the salon, are optional and up to the student to determine if they can afford it.

“The tough choices I had to make were whether I should buy a car or not and walk to my job,” Neil Sanipara, a student at River City who’s assigned job was as a welder, said. “Whether I should buy a house, an apartment or a trailer and maybe even buy a cellphone. I made my decisions by putting the most important things first as the top priority and then I did all the optional stuff.

“I learned how to save money and that is the most important of all and I also learned to calculate all my savings and costs.”

The Junior Auxiliary has hosted the Game of Life for threes years and will also set it up for students at Vicksburg and Warren Central high schools and at the Academy of Innovation, who will be joined by St. Aloysius and Porter’s Chapel, this school year.

“I think the kids have fun,” Porter said. “They stop and think, ‘if I buy a house, my insurance is going to be higher.’ I think it is letting them see that by the choices they make, other things are going to cost more and I may not need to get the cellphone because it costs more. A lot of these kids just don’t understand how much things cost and by one decision it affects another.”

After the students visited all the mandatory stations and the optional ones of their choosing, they cashed out.

“It was crowded, but it was also fun,” Mykenya Davis, a student at Vicksburg who’s assigned job was a lawyer, said.

“The way I did mine, I went to everything with the star beside it, everything with the red balloon so I knew that’s what I have to do. Then I went through and did the salon, saved $250 and I had a good amount of money left over. Living is really hard. You spend a lot of money, your children cost a lot and I only had one. It was really valuable. It was a lesson.”

Porter said the goal is to teach the students how to expense things, the importance of saving and also how to write a check.

“There’s a lot of stuff you have to pay for,” Kourtney Joseph, a student at Warren Central who’s assigned job was as a teacher, said. “Being an adult is hard. Now I know I can’t just spend my money on anything. I have to save it.”

By Gabrielle Terrett For The Vicksburg Post Vicksburg National Military Park invited volunteers of all ages to come and assist... read more