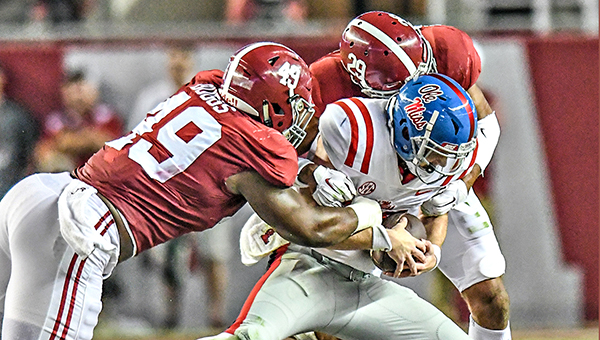 Ole Miss didn’t so much go into Bryant-Denny Stadium Saturday night as it did walk face first into a finely-tuned engine of football destruction.

It was the most points Alabama had scored in a game since 1979 and the first time it has scored 50-plus in consecutive Southeastern Conference games since 1945.

It’s also the most Alabama has ever scored against Ole Miss in a series that began in 1894 and has had 64 meetings. The previous high came in a 64-0 Tide victory in 1917 that barely managed to keep its status for biggest margin of victory.

“Watching them on film, I knew they were really good,” Ole Miss quarterback Shea Patterson said during a postgame press conference. “They are number one for a reason and came out and made a statement tonight.”

Alabama has scored at least 50 in four of its last five SEC games, a fact that coach Nick Saban was not the least bit interested in addressing after beating Ole Miss.

The beatdown of Ole Miss once again showed how dangerous an already talented Alabama team can be with a chip on its shoulder.

Alabama wound up with as many first downs (38) as Vanderbilt had offensive plays in its 59-0 win the following week.

Ole Miss (2-2, 0-1 SEC) was next up for the Tide, and had given them fits the past three years. The Rebels won two in a row in the series, including a 43-37 victory in Tuscaloosa in 2015, and pushed the Tide to the limit last year in Oxford.

Ole Miss is the only SEC team to beat Alabama since 2014.

Saban said leading up to the game that sometimes the “ultimate disrespect” is when another team quietly believes it has your number. Not anymore.

Alabama rolled up 613 yards of total offense, 365 of which came on the ground. Eight Alabama players ran the football, nine had receptions, and nine different players scored touchdowns.

Quarterback Jalen Hurts was the offensive star in the diverse effort. He completed 12 of 19 passes for 197 yards and two touchdowns, and ran for 101 yards and a score.

Levi Wallace had a 35-yard interception return for a touchdown on Ole Miss’ third possession. It was 21-3 at the end of the first quarter, 35-3 at halftime, and 59-3 after three quarters.

Other than the first-quarter drive that ended with a 26-yard field goal by Gary Wunderlich for its only points of the game, Ole Miss never got past Alabama’s 30-yard line.

Alabama (5-0, 2-0) intercepted Patterson twice and sacked him five times. It also forced three fumbles but wasn’t able to recover any of them.

“It was just us doing our job,” said Alabama defensive back Minkah Fitzpatrick, who had eight tackles and a sack. “They come to our house and Coach Saban said we had to defeat somebody, not just win the game. I think we did a real good job of defeating them, demoralizing them, and playing our game.”

Ole Miss will now turn around and take another road trip to Alabama, this time to Auburn to face the 13th-ranked Tigers (4-1, 1-0). The Rebels can’t afford to dwell on Saturday night’s loss, and head coach Matt Luke said they won’t.

The Vicksburg Fire Department responded to a fire at 8:41 p.m. Saturday at a business office located at 1304 Clay... read more