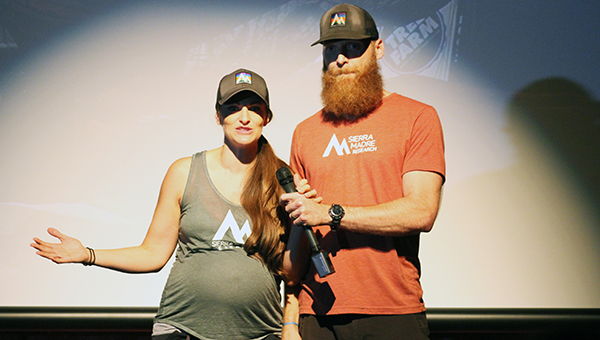 Juli and Richard Rhett takes questions from friends and family gathered for a viewing party at the Strand Theater for the season premier of ABC’s Shark Tank featuring them and their business Sierra Madre Research.

Vicksburg based entrepreneurs Richard and Juli Rhett and their company Sierra Madre Research officially have a new business partner in billionaire Richard Branson, owner of the Virgin Group.

The Rhetts were featured on the season premier of ABC’s Shark Tank Sunday evening where they made a deal with Branson to sell him 15 percent of Sierra Madre for $175,000.

The episode was filmed in Los Angeles in June, but they were unable to talk about their deal until it aired Sunday evening. They also went into the show having no idea what would actually be shown on TV as their hour and a half conversation with the Sharks was cut down for TV.

“It is so surreal,” Richard Rhett said. “You get all of this buildup. Every day since we knew we were going on has been completely centered around getting ready for this moment. Sixteen to 18 hours a day, all you are doing is trying to prepare for what is going to happen. Then when it hits and it is there in front of you, you look at it and it’s just like that’s really me on national television. It is amazing. It is unreal.”

The Rhetts pitched their company and their signature product the Nubé hammock shelter to sharks Daymond John, Mark Cuban, Lori Greiner, Robert Herjavec and Branson, who was a guest on the show the day they filmed.

Of the five sharks, Branson was the only to offer the Rhetts a deal, giving them actually what they asked for.

“It was a small defeat in me,” Richard said of each time a shark said they were out. “I wanted to have every single one of them biting at us and they didn’t. I was a little disappointed inside because of that.”

The Rhetts knew there was going to be a guest shark present for their show, but didn’t know it was going to be Branson. After doing research and talking to previous participants in the show in the weeks leading up to the filming, they said they were targeting Mark Cuban as their preferred shark. That plan quickly changed when they found out Branson was an option.

Although they were offered the deal in the tank in June, the contracts were not actually finalized until this past week. The months between filming and airing have been spent negotiating the contract with Branson and preparing for the onslaught of new interest in their product following the airing of the show.

Their deal with Branson was unique because as part of his deal he pledged to donate all the profits from his 15 percent to charity and the water projects that are a major part of Sierra Madre’s business. For every product sold, the company pledges to provide water for one person in Central America for one year through clean water well projects.

“When he said on stage to us that he is going to take all the profits he gets from this deal and put it straight to water, I immediately teared,” Juli said. “It was the moment you realize we are making a deal with a genuine guy.”

The Rhetts said now that the deal with Branson is finalized, the next step is to build upon the exposure Shark Tank afforded and the new capital gained through the deal to grow the company and expand their market share. Beyond his initial investment Branson’s role is still to be determined though.

“Richard Branson, the deals he does are multi, multi million dollar deals,” Richard Rhett said. “We are the smallest investment he’s ever made, that I know of.  What we are hoping for is to prove ourselves to Richard. I want to show him the value he’s invested into with our company.”

The response to the episode airing was immediate as the traffic on Sierra Madre’s website quickly jumped into the thousands and it hasn’t slowed down in the day since as their phones have been ringing constantly and they have received countless emails, Juli said.

“We had, I think, 30,000 people on the website at one time at the most and we absolutely had the most in sales that we’ve ever had before in that short period of time,” Juli said. “Sales were awesome. It wasn’t just interest. That was really, really good to see.

“It is funny because you can see it coming in in waves when it aired other place. On your Google analytics you could see half the country lighting up because that was where everybody was coming from because that is where it was airing at the moment.”