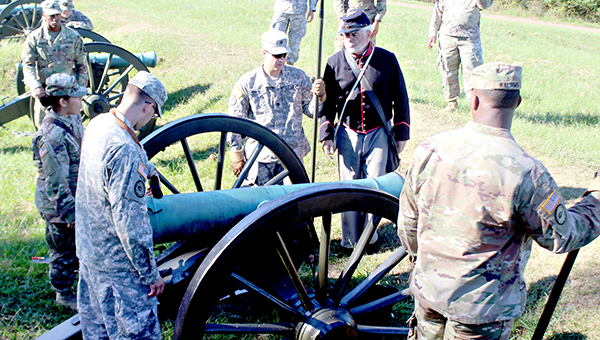 Tim Vane teaches ROTC cadets from the University of Texas Austin and San Antonio campus how to load at canon during leadership training at Vicksburg National Military Park Saturday.

The Siege of Vicksburg ended on July 4, 1863, but Saturday soldiers once again walked among those hallowed grounds.

“The battlefield gives us a wonderful classroom,” Retired Col. John Antal, who helped organize the course, said. “Basically our organization, How 2 Lead U.S., what we do is we bring them to an immersive, interactive and memorable classroom either in the field or garrisoned in their schools. Vicksburg brings us to a place that is very memorable, hallowed ground. We can talk about battle, battlefields and leaders’ decisions in ways we can’t do in a classroom.”

The cadets spent two and a half days training in Vicksburg using the military park to learn about tactics, terrain and teamwork, while building leadership skills.

“Today we are learning a lot about leadership and what it means to be a leader and not only that, we are learning about ourselves and how to work well with others,” Alekzander Skye a senior cadet at UT-San Antonio, said. “Some of us are not from the same school so it is neat how quickly we are coming together.”

One of the activities the cadets participated in was learning the detailed steps required to load and fire a cannon. Although they didn’t actually load and fire the canon, teams of cadets were walked step by step through the process to teach them about teamwork and attention to detail.

“The cannon is all about teamwork and what it takes to create a team that is interdependent, can work collectively, quickly and with a purpose,” Retired Col. J.P. Hogan, who helped organize the event with the Association of the U.S. Army, said. “We are really talking about team building, trust building and helping people understand how you accomplish missions quickly, adaptively and accurately.”

The VNMP served as the backdrop for each of the lessons as the cadets prepared for their future command by studying the past.

“I think it is really significant because it is important to realize what this country has been through and what soldiers before me have had to deal with,” Kristen Moser, a junior cadet at UT-Austin, said. “It is really humbling because there’s thousands of people that have died right here and now over 150 years later we are able to come here and learn from them.”

How 2 Lead U.S has been training cadets since 2010, and Antal said they have worked with more than 3,500 cadets in that time. Capt. H. Williams Hamblet said he has been coming with his cadets from UT-Austin for three years and has seen the program in Vicksburg pay dividends for his students.

“The cadets are learning leadership skills, tactics, a little bit of history and they are learning how to implement it and incorporate some history into their modern day tactics to use that for critical thinking skills as leaders,” Hamblet said. “I think it helps them relate old history or historical values and tie it into modern day tactics and they can incorporate those tools and see what lessons were learned from the past and use those in the present.”

There were about 30 cadets from the two schools here.

Vicksburg based entrepreneurs Richard and Juli Rhett and their company Sierra Madre Research officially have a new business partner in... read more