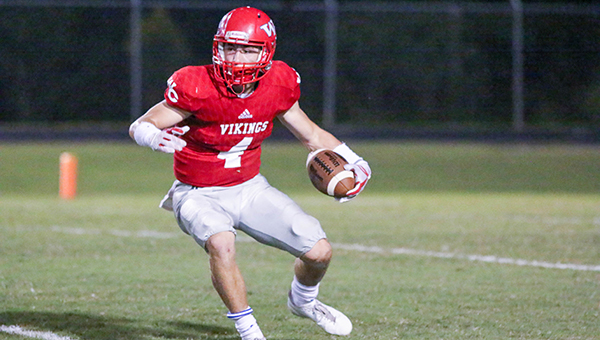 Warren Central defensive back Walt Hopson (4) runs with the ball after intercepting a pass last week against Greenville. Hopson had seven tackles and one WC’s five interceptions in a 41-8 victory. (Walter Frazier/For The Vicksburg Post)

Vikings’ secondary gets back on track

When Warren Central walked onto the field last Friday night for its homecoming game against Greenville, the scorch marks were still visible from its previous game against Northwest Rankin.

The Vikings had given up four long touchdown passes and 291 passing yards in that one, a 38-31 loss. It didn’t take long to turn it into just a bad memory.

The secondary redeemed itself with five interceptions, doubling its season total so far. It’s the most interceptions they’ve had as a team in a single game since at least 2007, the first year for which stats are available. Warren Central had had four interceptions in a game several times in that span, including earlier this season against Neville (La.).

The steady stream of turnovers gave the offense short fields that it converted into four first-half touchdowns and paved the way for an easy 41-8 victory over Greenville.

“I was very proud of them. A team that throws it that much and has a good quarterback is scary. I thought we did a good job of keeping them in front of us and getting after the passer,” Warren Central coach Josh Morgan said. “I was glad to see us make some plays in the secondary. That’s been a big emphasis for us this week.”

The Vikings still gave up 326 passing yards against Greenville, but it was largely based on a volume discount. Greenville quarterback Tayvon Littlejohn threw 57 times and completed 30, for a modest 5.8 yards per attempt and 10.9 per completion.

Littlejohn, who entered the game with 13 touchdown passes, didn’t get one until the fourth quarter against Warren Central. His five interceptions were one more than he had thrown combined in the Hornets’ first five games.

Caleb Wilson had two of WC’s five picks. Walt Hopson, Jalen Allen and Lamar Gray each had one. The Vikings also sacked Littlejohn five times, with Jeremy Miller getting two of them.

“We moved some guys around in our defense to different positions, and I think that helped us as well. It was good to see our DBs making plays when the ball was in the air. We did not do that (against Northwest Rankin),” Morgan said.
The win got Warren Central (4-2, 1-1 Region 2-6A) back on track in the Region 2-6A playoff race and provided a needed shot of confidence heading into a showdown this week with perennial nemesis Madison Central (5-1, 2-0).

The Jaguars will offer a different sort of challenge for the Vikings’ defense. They’ve only thrown the ball 70 times for 570 yards this season — fewer attempts and yards than Northwest Rankin and Greenville combined have had against WC in the last two weeks — and instead rely on a bruising running game that averages 232.2 yards per game and 6.7 per carry.

The bigger challenge for the Vikings, however, will be finding a way to win a big game on the road. They’ve lost by seven points each to No. 1 Pearl and Northwest Rankin in their only two games away from Viking Stadium so far.

Warren Central has only won twice against Madison Central since 2005, and four of the last five games in the series have been decided by seven points or less. Throw in the fact that WC’s region title hopes rely on not losing another game in the league, and it’s clearly a challenge it needs to overcome for a host of reasons.

Vicksburg based entrepreneurs Richard and Juli Rhett and their company Sierra Madre Research officially have a new business partner in... read more