Longtime pro will remain in job with county course

Clear Creek Golf Course in Bovina is the home course for Alcorn State’s men’s and women’s teams. When the school needed a new coach that made it a lot easier to find one.

Kent Smith, the head pro at Clear Creek, has been hired as Alcorn’s head coach, the school announced Tuesday.

Smith said the Alcorn job is a part-time position and he will remain in charge of the county’s golf facility.

“They’ve always practiced here the last two or three years and I got to know them well. It’s hard to find a coach right before the season, so I’m helping them out,” Smith said. “I did it for the kids, and I’m right here where they practice so it’s good. They come to me, and I don’t have to travel.” 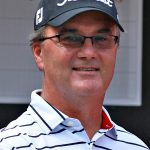 Smith said the lack of travel on his part and the limited competitive schedule for Alcorn will allow him to pursue both of his jobs effectively. NCAA rules require Division I teams to play in eight tournaments during a season that stretches the length of the school year.

Alcorn’s first tournament is Oct. 8-10 at The Bluffs in St. Francisville, La. It will also play in the Fred Marx Invitational in Monroe, La., Oct. 15-17, and the Gulf Shores Collegiate Oct. 21-24 in Gulf Shores, Ala.

Alcorn’s previous coach, Danny Forshey, left in August to become the Director of Golf at Bethune-Cookman University in Daytona Beach, Florida. Forshey had been at Alcorn for only one year, but was named the Southwestern Athletic Conference Coach of the Year and helped Danny Racioppa become the conference’s individual men’s champion.

Smith has been the head pro at Clear Creek since 2005, and served in the same position at Vicksburg Country Club from 1990-2004. He has never coached a team, but has given lessons to dozens of individual players throughout his career as a PGA professional.

“We’re really excited to have Coach Smith on campus. He’s had the opportunity to watch our student-athletes play at Clear Creek over the years and is already familiar with Alcorn and golf in Mississippi,” Alcorn State director of athletics Derek Horne said in a release. “Coach Smith is both an accomplished golf instructor and player. His prior experiences will be invaluable when helping our student-athletes grow as golfers and successful individuals.”

VHS soccer tryouts Tryouts for Vicksburg High’s boys’ soccer team will be held on Oct. 4, from 4 to 5:30... read more