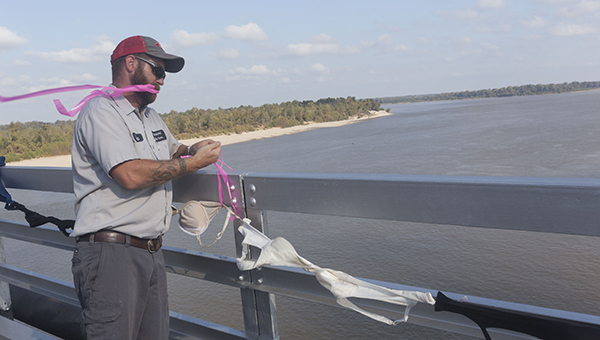 Warren Ellis with The Vicksburg Bridge Commission uses pink ribbon to tie bras along the side of the Old Vicksburg Bridge in preparation for the Riverwalk Casino 'Bras Along the Bridge' breast cancer walk on Friday. The Riverwalk Casino asked that new and old bras be donated for the walk and pledged that for each bra donated, Riverwalk will donate $1 to the American Cancer Society. The walk is scheduled for Saturday at 9 a.m.

Bras needed for Bras Along the Bridge

Cups will runneth over during the ninth annual Bras Along the Bridge event.

The Riverwalk Casino will collect bras throughout the month of October in honor of Breast Cancer Awareness month, and for every bra collected the casino will donate $1 to the American Cancer Society.

“This is something that we’re excited about every year,” said the general manager of Riverwalk Casino Ginny Tzotzolas.

“It’s a way to really get the community engaged and involved with the fundraising process in a very creative and fun way,” Tzotzolas said.

This year, Riverwalk Casino has partnered with Alpha Media Radio Group of Jackson for the event, and there will be several drop off points through out the Jackson/Vicksburg area, where bras can be donated.

For a couple of the years, the bras were strung at the casino for a few days and then transported and hung at the Making Strides Against Breast Cancer Walk in Jackson, but Tzotzolas said when they had the opportunity to bring the bras home they moved it back to Vicksburg.

For me, because I started the event, it felt like it was coming back home, Tzotzolas said.

“I feel like this is where it belongs. It is ours and was something unique to our town and it was something I felt was real special with the river bridge,” she said.

From the fundraiser’s inception in 2008, Bras Along the Bridge have raised $116,703, Tzotzolas said.

75 percent to 90percent and doctors suggest this is due to early detection and improved treatment options.

Tzotzolas said she appreciates the community supporting the event every year, and looks forward in seeing everyone there on Nov. 4.

“There are very few opportunities to go out on that bridge, so it is a great chance go out and see it,” she said.

Classics in the Courtyard kicks off Oct. 20

Classic music ranging from folk to country and rock will be returning to the Southern Cultural Heritage Center for the... read more