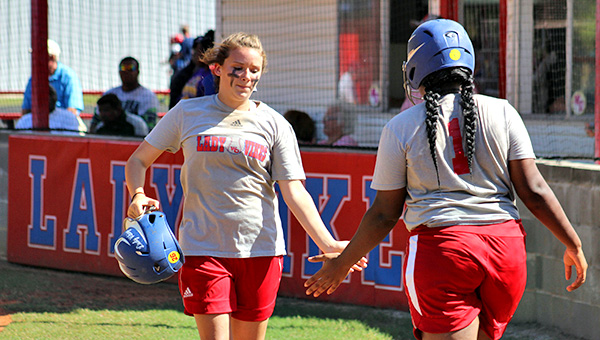 Lady Vikes get past West Harrison

Warren Central made things a lot more interesting than they probably needed to be Friday against West Harrison. In the end, though, they made sure it wasn’t anything to get too worked up over.

The Lady Vikes swept West Harrison, 13-1 and 9-8, in the first round of the MHSAA Class III slow-pitch softball playoffs. West Harrison rallied for seven runs in the bottom of the seventh inning in Game 2 before it was finally subdued.

Warren Central will play either Brookhaven or Meridian in the second round on Tuesday. Those two teams will play their first-round series on Saturday. The location and times of the second-round series will be determined after the first round is complete.

“End of the day we still made it to the next round, so that’s all you can ask. And, hopefully, they learned a lot and gained a little bit of confidence that we can hold on even if it gets a little tight,” Warren Central coach Dana McGivney said.

Cocoa Fultz homered to lead the Lady Vikes to a 13-1 mercy-rule shortened win in Game 1 on Friday, and then went deep again in the top of the first inning in Game 2 to stake them to a 2-0 lead.

Warren Central (15-6) steadily added to the lead throughout the game, but was never able to land the knockout punch that would have ended things early. It had 18 hits in the game, yet left the bases loaded three times, two runners on once, and led 4-1 after five innings. Twelve runners were stranded in all.

“It’s very frustrating, especially when we scored 13 runs in four innings in the first game and we couldn’t score but nine in seven innings here,” McGivney said. “You’ve just got to score runs when you have them on base, and we had them where we wanted them and didn’t finish. We’ve just got to be more patient and pick better pitches, and do the things we’re capable of instead of getting anxious.”

The Lady Vikes finally started to open it up in the sixth and seventh innings. Kaitlyn Mitchell hit a two-run double in the sixth inning, and Laura Reagan Logue a two-run single in the seventh to push the lead to 9-1.
Mitchell and Logue each had three hits and two RBIs. April Lynn finished 2-for-4 with a double and an RBI, while catcher Bri Daughtry had two hits and her courtesy runner Kayleigh Beard scored three runs.

Warren Central seemed headed toward another easy win until things quickly unraveled in the bottom of the seventh. It hadn’t committed an error or allowed an unintentional walk to that point, but commtted two errors and walked four batters — one intentionally — in the seventh.

West Harrison put seven consecutive runners on base, capped by a two-run double by Sydney Sims that cut it to 9-6, before recording an out.

The string finally ended when Gracey Patton lined into a double play, but Braxon DeWitt followed with an RBI single and Jada McCalebb hit an RBI double to make it 9-8 and put runners at second and third.

Finally, the Lady Vikes were able to squelch the rally. Bethany Stiglet, the No. 9 hitter in West Harrison’s order and the 13th to come to the plate in the inning, hit a weak foul ball with two strikes to strike out and end the game and the series.

“We just let them stay around too long and didn’t score when we had the bases loaded four different times,” McGivney said. “We had the bases loaded and scored one run or no runs four different innings. That can’t happen. When you let a team stay around in a slow-pitch game they’re going to have a good inning. You just have to expect it. We just didn’t close the door when we should have.”

Back in August, a steady stream of rainouts kept Warren Central’s slow-pitch softball team off the field and forced it... read more