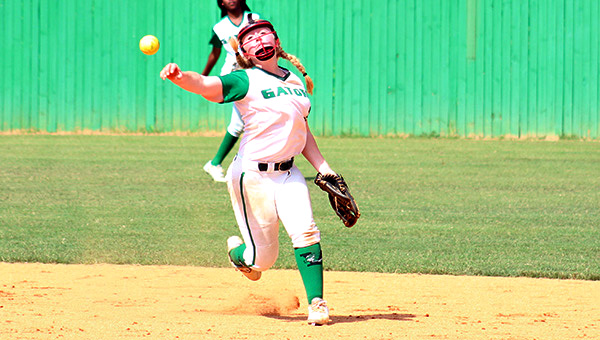 Vicksburg High shortstop Chelsea Myers throws to first after fielding a grounder earlier this season against Greenville. The Missy Gators will go on the road Friday to play D’Iberville in the first round of the MHSAA Class III slow-pitch softball playoffs. (Ernest Bowker/The Vicksburg Post)

The Vicksburg Missy Gators aren’t exactly playing with house money heading into the MHSAA slow-pitch softball playoffs. Not yet, at least. They still have plenty of goals, up to and including a state championship.

No matter what happens over the next two weeks, however, it’s already been a good ride.

The Missy Gators finished the regular season with a 10-6 record after winning just two games in 2016. They’ll enter the Class III playoffs as the No. 3 seed from Region 6 — a benefit from an expanded bracket in which 30 out of 31 teams qualified for the postseason — but still eager to take advantage of the opportunity to put an exclamation point on things.

Vicksburg will go on the road to face D’Iberville for a first-round series Friday.

“Obviously the goal is to go all the way to the state championship. I’m happy with a lot of things that have gone on with the season up to this point, regardless of what happens down there,” Vicksburg coach Brian Ellis said. “The girls have put in a lot of work and a lot of time. I demand a lot from them, but I think it has shown. People see the progress that we’re making, so if we can go down there and win that first and second series and get to the big guns like Neshoba Central, then we’ve had an exceptional year.”

The Missy Gators are in the South half of the bracket and wouldn’t see either of the championship favorites — Neshoba Central or Northwest Rankin — until the state championship series. The winner of their first-round matchup with D’Iberville will advance to play either Wayne County or Forest Hill on Tuesday.

Vicksburg is riding a three-game winning streak into the postseason and the key to making a deep playoff run, Ellis said, will be consistency.

“We’re not a power hitting team. We’ve got some girls that can hit for power and hit it out, but we’re not consistent with that. We’ve got to do a better job up and down the lineup of hitting the ball hard, getting the barrel on the ball and making some defenses make plays. We haven’t really been doing that here of late,” Ellis said.

“When we get the consistency (hitting) and score some runs, we seem to settle down and do a little bit better defensively,” he said. “That’s a big thing, too. You can’t make the mistakes on the routine plays. We seem to go in spurts with that. If we can do that, we have an opportunity to win in the playoffs.”

Warren Central prides itself on not having a lot of stars, but Mississippi’s football coaches apparently think otherwise. The Vikings... read more