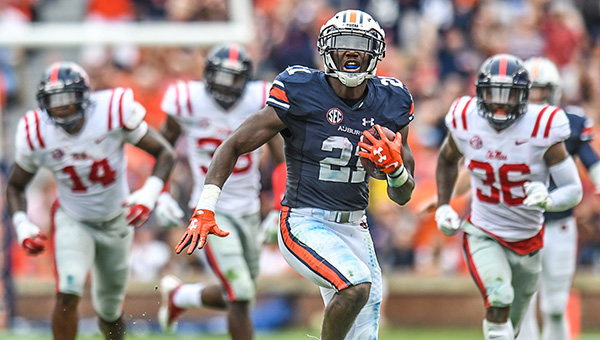 AUBURN, Ala. (AP) — Kerryon Johnson is enjoying taking his mostly healed hamstring on frequent jaunts to the end zone.

No. 12 Auburn is happily riding along with him. Both continued their hot streaks on Saturday, with Johnson rushing for a career-high 204 yards and three touchdowns and the Tigers beating Ole Miss 44-23.

Johnson and the Tigers (5-0, 3-0 Southeastern Conference) continued a recent tear with their third straight lopsided win over a league team. Johnson, who didn’t play in the fourth quarter, has 11 touchdown runs during that stretch after missing two games with a right hamstring injury.

“I felt so close to normal that I just couldn’t hide it,” said Johnson, who had a career-high 28 carries. “In the open field, I was making people miss and I was able to get up to a faster speed than last week. It just felt really good to being normal again.”

The Rebels (2-3, 0-2) endured their second straight blowout in the state a week after losing 66-3 to No. 1 Alabama. This one was much closer, but not competitive.

The Tigers were up 35-3 at halftime before Shea Patterson and Ole Miss managed to whittle down the lead.

“This was a game that a lot of teams could have come out and flopped around in the first half, especially with what happened last week with us and them,” Auburn coach Gus Malzahn said. “Real proud of our leadership that we answered the bell.”

Auburn’s Jarrett Stidham completed 14 of 21 passes for 235 yards and two touchdowns. That included a screen pass which Ryan Davis took 75 yards for a touchdown in the first quarter, the Tigers’ longest offensive play of the season.

“It’s something I’ll be bragging about until the day I die,” Carlson said.

The Rebels snapped a 10-quarter streak without a touchdown when Patterson hit D.K. Metcalf for a 9-yard touchdown in the third quarter.

Patterson led two more touchdown drives in the fourth. He completed 34 of 51 passes for 346 yards and two touchdowns, both to Metcalf.

“We really made a statement that we wanted to finish the game, whether we win or lose, with a good vibe coming out of the game,” Patterson said. “I think offensively we were rolling. I think we feel a lot better than we did last week coming out of the second half. So we’ll look to build on that momentum.”