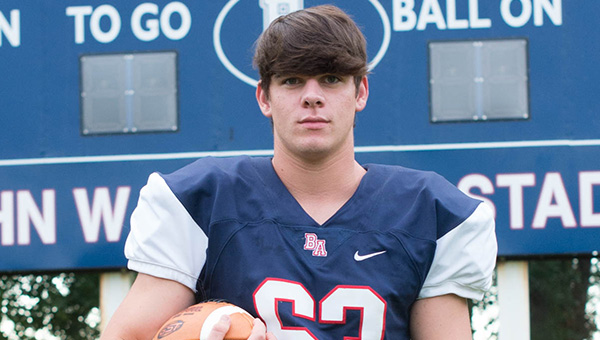 Briarfield Academy football player Kade Howard had six tackles, blocked a field goal and an extra point, and knocked down a fourth down pass on the final drive of a 42-40 win over Prentiss Christian on Friday.

Kade Howard had six total tackles for the Rebels, blocked an extra point and a field goal, and also batted down a pass on fourth down to end Prentiss Christian’s (6-1, 3-1) final drive.

With the victory, Briarfield set up a showdown at Riverdale (6-1, 5-0) next Friday for first place and, most likely, the district championship.

Tallulah Academy got back on the winning track Friday night, beating Franklin Academy 52-8 to snap a four-game losing streak that was its longest since joining the MAIS eight-man football division in 2014.

Joshua Collins rushed for 101 yards and two touchdowns for the Trojans (4-4, 1-3 District E-2), while quarterback Parker Kivett threw for one touchdown and ran for another.

Collins also had six tackles on defense, including two for loss, and an interception.

Tallulah Academy will play at Christian Collegiate Academy next Friday at 7 p.m. in Gulfport.

Tallulah Academy had the perfect ending for a nearly perfect season. The Lady Trojans scored two runs on an error... read more