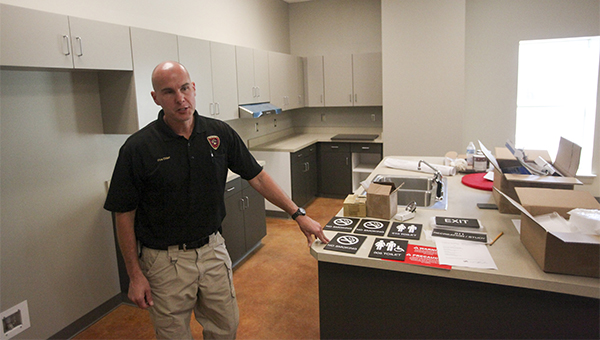 When Vicksburg Fire Chief Craig Danczyk stands in the interior of the city’s new fire station, he talks about the space in the bay for three trucks with the potential to hold more equipment if necessary, and the building’s place in the department’s history.

Danczyk said the goal is to have the station finished by the end of October and hold a ribbon cutting ceremony to officially open the station and put it in service.

“That’s what we’re hoping for,” he said. “The contractor is still finishing some odds and ends; I would say we’re about 99 percent complete.”

The 5,110-square-foot fire station will serve as home to three shifts of firefighters and ambulance crews with three bedrooms holding two single beds each, one bedroom with a single bed and a separate bedroom and bath for the shift captain adjacent to his office.

The building has three bathrooms, one of them handicap accessible, kitchen, dayroom and a study.

“What we did was take the design for Station 5 and reduce it a little,” Danczyk said.

“We have a 14-foot bay and two 12-foot bays. It’s functional for our needs and we have enough room for backup vehicles if needed. This station will accommodate us for years to come.”

One new feature is lockers for the firefighters’ turnout gear; the suits they wear when they respond to a fire.

“In the past, our (city) building maintenance department built places to hold turnout gear,” he said. “This is prefabricated and designed for turnout gear. At the end of their shift, they can put their gear in the rack. If it’s damp, it can dry out.”

There are also portable hose racks to aid with drying and exchanging fire hoses on trucks.

The turnout gear racks and portable hose racks are not the only new equipment for the station.

The new station will be home for the department’s new $750,000, 78-foot ladder truck, which doubles as a pumper. The truck is expected to be completed Oct. 18 at a plant in Florida and then moved to Alabama for decals and testing.

“I would like to see it in Vicksburg by Halloween,” Danczyk said. “It will give us a third ladder truck.”

Having the new ladder truck at the East Clay area station, he said, is expected to improve the department’s coverage map for that area because of the multistory hotels and because the fire department is the primary responding agency for fire calls at Merit Health River Region.

Once the station is opened, it will replace Station 6 at the corner of Cherry and Jackson streets, and the change will result in a redrawing of the department’s coverage maps.

The opening of Independent 3, Danczyk added, means the department will have three ambulances along Interstate 20, with other ambulances at Station No. 8 off Halls Ferry Road and Station 2 on Indiana, “so we think we’ll have very good coverage of I-20, our city limits and our county coverage.”

By Gabrielle Terrett The Vicksburg Post This year’s 23rd annual Fall Festival was the main focus for blues and food.... read more