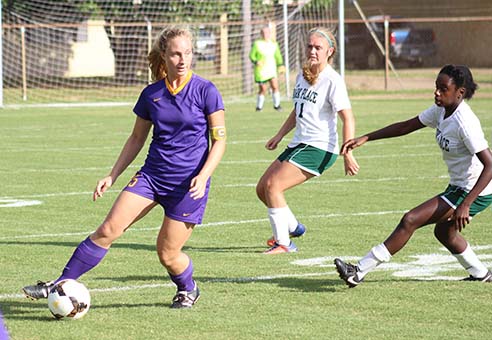 Two years ago, when she was a sophomore, St. Aloysius soccer player Mary Ranager missed the entire season with a torn ACL in her knee. That was also when she showed her coach exactly what kind of player she was.

Despite not being able to play, Ranager continued to come to practice and games to support her teammates and help them along.

“Mary has always been a leader on that team, as far as leading in goals or leading in something. She gives everything to the sport, and you can tell,” St. Al coach Scott Mathis said. “Even when she was hurt she would show up to every practice. She’s a little stubborn and hard-headed, but that helps her play and helps her be better.”

Ranager rebounded from her knee injury to score 15 goals last season and 21 this year. St. Al’s season ended with a 3-2 loss to Park Place in the MAIS Class AAA semifinals last week, but she’ll get one more chance to play when she suits up for the association’s all-star game Wednesday in Jackson.

“I’m really looking forward to it, and representing St. Al as the only senior. I’m excited,” said Ranager, who also had 10 assists in addition to her season goal total.

Ranager was one of six St. Al players — along with Madelyn Polk, Ann Elizabeth Farthing, Cameron Mathis, Cati Matthews and Meg McDaniel — to earn All-District 3-AAA honors. She’s also the only senior on the roster.
After leading the Lady Flashes to a 9-4 record and their second appearance in the Class AAA semifinals in three seasons, she was an obvious pick as an all-star.

Although Ranager tends to be soft-spoken, Scott Mathis said her passion for the game comes through loud and clear.

“She plays indoor, she plays outdoor for seven or eight months out of the year. She’s just always going,” Mathis said.

The all-star game likely will not be the last competitive soccer match that Ranager ever plays. She’s drawn recruiting interest from a number of junior colleges, as well as some smaller four-year schools like Millsaps, Delta State and Belhaven.

Ranager isn’t sure where she’ll play next, but Mathis said whoever lands her is getting a gem.

Flashes, Eagles down to the wire in pursuit of MAIS playoff berths

When the calendar turns from September to October, football coaches in the Mississippi Association of Independent Schools turn into mathematicians.... read more