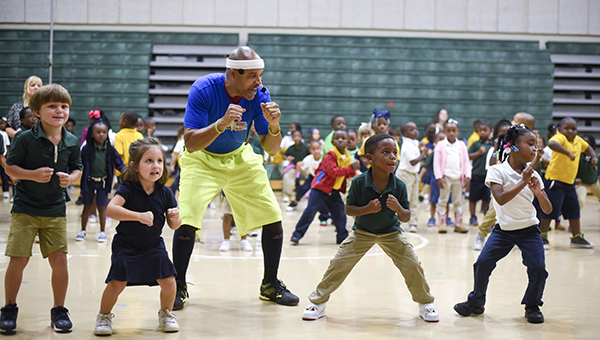 The gymnasium at Dana Road Elementary School was alive Tuesday morning with a hot beat and jumping and hopping children and teachers getting their brains in gear.

Move to Learn guru Coach Larry Calhoun visited the school Tuesday, bringing the joy of exercise mixed with lessons about the importance of teachers to children in the school’s pre-K and kindergarten and first- and second-grade classes.

Co-sponsored by the Bower Foundation, an organization dedicated to improving the state’s health, and the Mississippi Department of Education, Move to Learn is in its sixth year.

“Move to learn is a teaching tool, it’s not a panacea, it’s not a cure-all; it’s a teaching tool for teachers,” Calhoun said. “(It’s) something known as brain breaks — five-minute movements in a classroom setting. They’re designed for any age group K through 6th grade.”

He said research has shown a strong correlation between academic performance and movement.

“When there’s movement for these five minutes, something called neurogenesis occurs in the brain, which is simply brain cell growth,” Calhoun said.

“They’ve found that in the last six years, they have had fewer behavior challenges with schools and teachers that use the brain break, and a co-relation between academic performance.

“They have also found an increase in some schools in average daily attendance.

“This is not a fitness; we don’t call this fitness. Sometimes people associate this with fitness. Fitness is a byproduct or an end result, but the main focus is academic achievement. It doesn’t take away from instruction time. Usually it’s done between transition from classes.”

Move to Learn videos, he said, are accessible “to every teacher, every school district, every principal and school superintendent in the entire state of Mississippi,” and can be accessed through movetolearn.org.

“It’s a free site; there’s no cost, no registration,” Calhoun said. “The second way is through YouTube.”

He said several elementary schools in Vicksburg use Move to Learn on a regular basis, and when program officials find there is high usage, they ask him to go out and do a live show.

During the live show, Calhoun talks to the students about health, how to deal with certain situations they may encounter at school, and leads them in exercises, periodically bringing students up front to do the exercises with him.

“On your worst day in class, you may give somebody hope. You have the power and you can make a child a success,” he told the teachers. “Somebody in this room needs you more than you and they know.

“He was awesome,” Dana Road principal LaShonda Keyes-Smith said. “I’m very appreciative. I was excited about Dana Road being one of 100 schools in the state selected to be visited by him, and he extended an invitation that if we ever needed him, to just give him a call and he would come back at any time. We were very honored and excited to have him at Dana Road.”

Smith said Move to Learn videos featuring Calhoun are used at Dana Road to help children in the pre-K and kindergarten classes get moving.

The kids were excited to see him. One child asked her how we were able to get him out of the TV.

Karla Cook spent Friday afternoon handing out ice cream to students on the playground at Bovina Elementary. The class was... read more