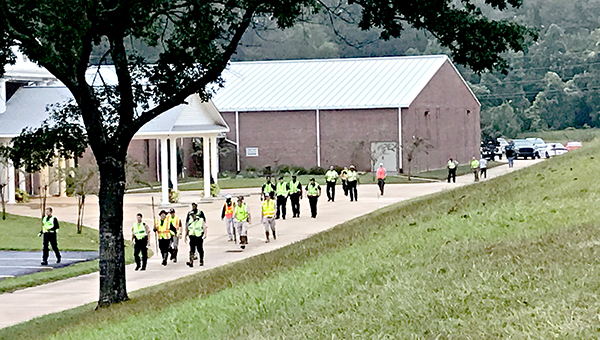 SEARCHERS GATHER: Searchers including Warren County Sheriff’s deputies, Vicksburg Police officers, firefighters and other first responders answered the call Monday to search for a man missing from an area nursing home. The man was found safe in woods behind the nursing home Wednesday morning.

An almost 20-hour search for a 76-year-old man who was reported missing Monday had a happy ending Tuesday morning when he was found in the wooded area behind the nursing home where he is a resident.

James Wesley Jenkins, who was reported missing after he walked out of Shady Lawn Nursing Home, was found about 10 a.m. Tuesday in the woods about one-eighth of a mile east of the nursing home sitting in a ravine. He was conscious and talking to his rescuers, authorities said, and was taken by ambulance to Merit Health River Region, where he was in stable condition.

The search for Jenkins began soon after he was reported missing.

“When we found out he was missing, we called out for some additional help, and once that help arrived, we started putting our plan together and started our search,” Moore said. “It’s great to see us (the different units) come together as one unit, and we’re very appreciative; it was much needed.”

“Warren County, which includes the sheriff’s office, county fire and the emergency management are all members of the Mid-Mississippi Strike Team, which is a cooperative group of agencies that assist one another in providing manpower for each other (in emergencies) and within that group is an OSAR unit, overland search and rescue,” Pace said.

The group searched wooded areas behind the nursing home, Porters Chapel School and the Porters Chapel Road/Indiana Avenue area late into Monday night before being recalled, he said, adding authorities put up a drone with an infrared camera to try and spot Jenkins from the air, but the heavy cover of trees and other foliage prevented the camera from locating him.

The search resumed Tuesday about 5:30 a.m. with the searchers returning to the area they covered the day before with a team of searchers finding Jenkins.

“It is believed that he was moving during the night, because the area where he was, was thoroughly searched during the afternoon yesterday and last night, and he was there this morning,” Pace said Tuesday.

“This was an excellent cooperative effort involving multiple agencies, that had positive results, and it’s not often that we have happy endings in these types of searches,” he said. “All involved were very relieved.”

Karla Cook spent Friday afternoon handing out ice cream to students on the playground at Bovina Elementary. The class was... read more