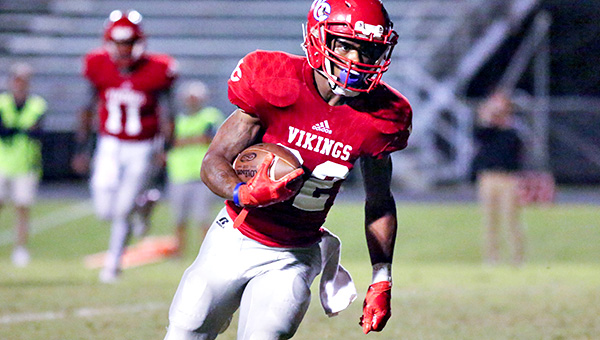 Running back Anfernee Funches will lead Warren Central into Friday’s home game against Murrah. Funches is one of four Warren Central players with at least 200 rushing yards this season. (Walter Frazier/For The Vicksburg Post)

Despite being 1-2 in Region 2-6A for the first time since 2011, Warren Central is not ready to give up on either its playoff or region title hopes just yet.

The Vikings are well aware, however, that they’re playing from behind as they chase both in the final month of the season.

Warren Central (4-3, 1-2 Region 2-6A) hosts Murrah (1-6, 0-3) Friday night at 7 in a game that seems easy on paper but is still a must-win. Warren Central needs to win its last four games — including dates with Clinton and Starkville — to avoid being the odd man out in a crowded playoff race, and also hope a few things break their way to help them climb the ladder.

“We’ve got to handle our business on the ones we’re supposed to, for sure. This is one we’ve got to get to set up two big ones in the coming weeks,” Warren Central coach Josh Morgan said. “We’re definitely not waving any white flags. We knew it was going to be tough, and we still have everything in front of us.”

What’s behind the Vikings is a couple of missed opportunities that have put them in a tough spot. Their two losses have both been on the road by a single score and decided in the final minute of regulation or overtime.

Last week, they lost 31-27 in double overtime to Madison Central after letting a lead slip away in the fourth quarter and then missing a field goal at the end of regulation. Morgan said one of his team’s best attributes is its resiliency, which it has shown before and he believes will show again after such a tough loss.

“I don’t think there’s any doubt we have that, the more I’m around them and in wars with them,” Morgan said. “If we can turn the page and have something good happen down this last stretch, that would be a good thing. Our goal is if we can just get in the playoffs and hit our stride, I like our chances against anybody.”

“With some of the other games this week we could be 2-2 and right in the middle of it all,” Morgan said. “I don’t think there will be anything decided until possibly the very last week. All we can do is take it one week at a time and not get ahead of ourselves, because we’re not good enough to do that.”

That approach leads back to Murrah, which has lost 14 of its last 15 meetings with WC. The Mustangs have won just three of their last 19 games overall. Morgan wasn’t too interested in diagnosing the reason for Murrah’s struggles.

“I know playing in the district, they’ve played some mighty good football teams and two of their losses have come there,” Morgan said. “Our job is not to coach them, though. Our job is to whoop them.”