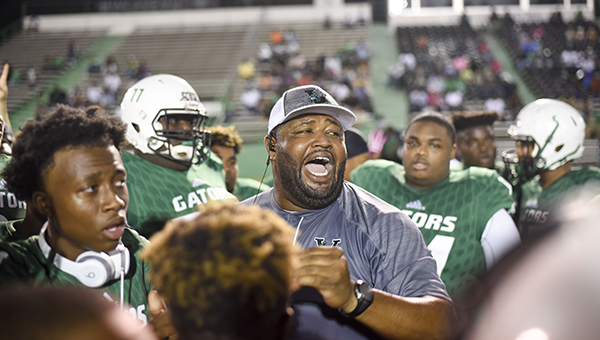 Gators in thick of playoff race

For a month, the Vicksburg Gators looked like they might be heading toward a winless season. Somehow, some way, they’ve not only done a 180 in the past two weeks, they’ve put themselves in the middle of a playoff race.

Finishing in the top two and hosting a playoff game is likely out of the question — Cleveland Central and Germantown are three games ahead of VHS with four to play — but there is a clear path to the No. 3 seed heading into the final month of the season.

“That’s the message I told to the kids. If we win out, we’ll end up in the same spot as last year — 5-2 in the district and be the No. 3 seed,” VHS coach Lorenzo Breland said. “It’s still a real good Ridgeland team we have to play this week. Our biggest focus is to win out and make a push for the playoffs.”

The Gators’ season turned around two weeks ago with a dominating 23-0 win over Neshoba Central that snapped a five-game losing streak in which they’d been outscored 148-33. They lost 21-14 to Cleveland Central last week, but giving one of the best teams in Class 5A all it could handle kept the positive momentum going.

“We definitely feel good. We knew it was going to be a tough game, and we wanted to set the bar, make it close in the fourth quarter, and try to make the plays to win it,” Breland said. “It’s no moral victories, but everybody probably said we were going to get blown our and that wasn’t the case. We played a great game.”

Now they’ll begin the stretch run by facing Ridgeland on Friday night. It’s the first of four consecutive games to close the regular season against the teams jumbled together in third place in Region 2-5A.

Ridgeland has been blown out in its last two games and seems on the opposite trajectory from Vicksburg. If the Gators win, they could have a tenuous hold on third place by the end of the evening.

After their horrendous start, the potential for a fantastic finish has Breland and the Gators salivating at the possibilities.

“The district is kind of jumbled up and wide open. We just have to jump in the driver’s seat,” Breland said. “Now it’s really going to be a dogfight. We’re in it and control our own fate. We just have to win out and get to the playoffs 0-0.”

Investing in education is the life-blood of a community. Well-educated citizens lead to individuals who become valuable assets to a... read more