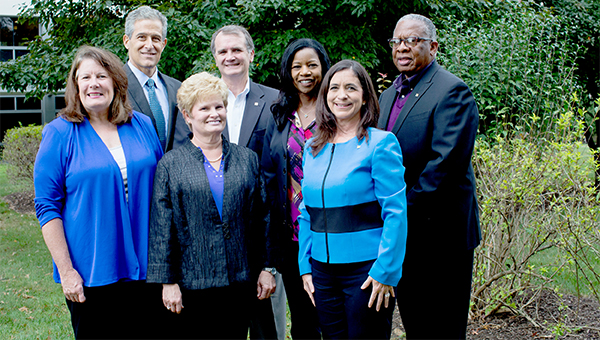 Vicksburg was on a national stage this week as Mayor George Flaggs Jr. and five city residents traveled to Princeton, N.J. to accept the 2017 Robert Wood Johnson Foundation Culture of Health Prize during ceremonies held Tuesday through Thursday.

The city was one of eight cities to receive the award from the Robert Wood Johnson Foundation, which works to improve health and health care in the U.S. Attending the ceremonies with Flaggs were Jane Flowers, Marcia Weaver, Michele Connelly, Linda Fondren and Mark Buys.

Flowers, Weaver, Connelly and Fondren were members of the Vicksburg Live Healthy Action Team that prepared the application and presentations that helped the city be one of the eight cities nationwide to get the award.

“It was a wonderful opportunity for us to not only share the successes of our community, but to learn from other communities and what they’ve done to create a culture of health, so that across the nation we can assist the Robert Wood Johnson Foundation in creating a culture of health nationally,” Connelly said.

The award will be presented to the public Oct. 30 during a local celebration from noon to 2 p.m. that coincides with the United Way of West Central Mississippi appreciation luncheon. The program will also include a seven-minute video on Vicksburg prepared by the Robert Wood Johnson Foundation.

“It speaks to the vision of so many people of this city and the potential of this city,” he said. “It puts us on the map for years to come on how far we’ve come and shows that we have a sustainable future evolving around the culture of health care and the changing of the quality of life for the citizens of Vicksburg.”

He said Connelly and Fondren represented the city “in a way that I’ve never been so proud to be in a room of several other participant recipients.”

The video, he said, validates “everything good and awesome about Vicksburg and its future.”

“When people (at the ceremonies) were watching that video, I could sense the pride and the joy of people that had no idea that Vicksburg had come so far since the Civil War,” he said, adding he plans to play the video for city employees the first Tuesday in November.

“To Vicksburg, the Culture of Health Prize is changing the conversation and creating conversations around what works for health,” Fondren said. “We could not pay for this national coverage about the efforts we are making.

“It is us who must use this recognition and keep the prize going.”

Officials were notified March 7 that Vicksburg was one of 11 cities in the U.S. to be named a finalist for the award by the Robert Wood Johnson Foundation, and learned in September the city was one of the eight winners after foundation officials visited the city and met with community leaders.

The award included a $25,000 cash prize and membership in a network of 35 other prize-winning communities that have demonstrated “unwavering efforts to ensure all residents have the opportunity to live healthier lives.”

The application to the foundation highlighted four areas, or accomplishments:

• The fitness and nutrition efforts of Shape Up Mississippi and Shape Up Vicksburg, to provide free health and fitness classes; efforts to encourage African-Americans to have a healthy lifestyle by promoting walking programs in the Vicksburg National Military Park and the “walk with a doc” program, a collaboration between Shape Up Mississippi, Merit Health River Region and Walk America, where doctors walked with participants and answered health-related questions.

The collaboration between Shape Up Mississippi, the city of Vicksburg, Alcorn State University and My Brother’s Keeper, a nonprofit organization that promotes health and wellness, to develop a community garden at the Vicksburg Municipal Airport.

• The city of Vicksburg’s commitment improving health and wellness through the development of walking tracks, the installation of a skate park and collaboration with My Brother’s Keeper, to install a new walking track by the skate park and provide amenities at other walking trails and parks, city-sponsored youth sports programs and camps.

• The Leader in Me Program in the city’s public school system, which helps equip students with self-confidence and the skills they will need to be successful, and teaches them to be creative, set and meet goals, get along with people from different cultures and backgrounds, and how to resolve conflicts and solve problems.

Hundreds of runners will be in Vicksburg

Runners from as many as seven states will be in Vicksburg Saturday morning for the 29th annual Over the River... read more