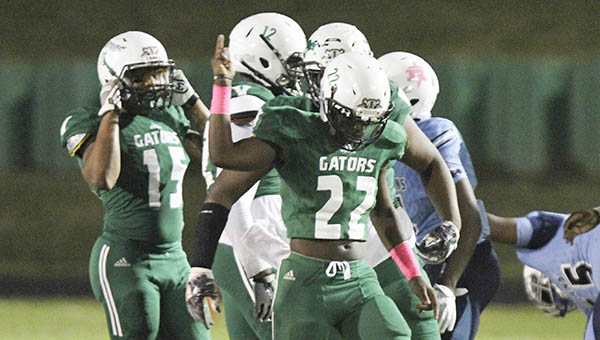 Vicksburg senior Nick Anderson called it on the field following last week’s near miss against Cleveland Central — his team was going to go out and get a win on homecoming against Ridgeland.

A week later, it was Anderson who made the key play to deliver the Gators their first home win of the season, 26-21 over the Titans, and keep them in the hunt for a playoff spot that looked like a pipe dream three weeks ago.

On the second play of the fourth quarter, with his team trailing 21-20 following a missed extra point, Anderson made the switch from defensive end to linebacker and dropped back into coverage. Ridgeland quarterback Zion Smith never saw him drop and Anderson picked off the pass and raced 37 yards down the right sideline for what proved to be the game-winning touchdown.

“I am coming out of halftime and I just hear this voice and it said ‘My son, you figuring to catch a pick,’ and I already knew who it was, it was God talking to me,” Anderson said. “I told all my teammates, I’m figuring to catch a pick-six … I dropped and I didn’t even see the quarterback. I just saw the ball come up and I caught it and then I froze because I didn’t realize I caught it because usually I drop it.” 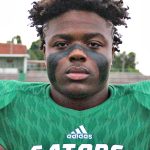 After starting the season 0-5, the Gators (2-6, 2-3 Region 2-5A) control their own destiny for the playoffs after securing their second region win of the season, and second in three weeks.

They moved a step ahead of a six-team pack that entered the week with identical 1-2 records in the region. The pack included Ridgeland (3-5, 1-3), and Friday’s win gave VHS a key head-to-head tiebreaker advantage.

Vicksburg will now play two consecutive road games, at Canton next week and then at Callaway on Thursday, Oct. 26. The regular-season finale is Nov. 3 at home against Holmes County Central.

Win them all, and the Gators will secure the No. 3 seed from Region 2-5A and most likely a trip to Olive Branch for the first round of the Class 5A playoffs.

“We talked about it all week,” Vicksburg coach Lorenzo Breland said. “Take it one play at a time, one drive at a time and we control our own destiny and that is what we came out and did tonight. It means everything (to get the first win at home). It is not about me. It is about these kids and the effort they put in Monday through Friday. I love these guys and these seniors earned it and deserve it and we are still in a spot to control out own destiny.”

Vicksburg fell behind 14-0 early as the Titans marched down to score on two of their first three possessions. Following a four-and-out by the Gators on their first possession of the game, Ridgeland marched 69 yards in 12 plays to take the lead on a 4-yard touchdown pass from Smith to Mike Price.

The Gators fumbled on their next possession, setting Ridgeland up at its own 44-yard line and Markell Young punched in into the end zone from the 1-yard line following a nine-play drive. Young finished the game with 121 yards and two touchdowns on 24 carries.

Vicksburg cut the deficit in half with 1:17 left in the second quarter following an 80-yard drive when quarterback Joe Johnson ran it in from the 2-yard line.

The Gators erased the rest of the early deficit on their first offensive play of the second half, when Johnson found Marquis Martin for a 50-yard touchdown pass.

Ridgeland quickly answered and retook the lead on its next drive when Young found the end zone for the second time in the game after breaking multiple tackles on his way to a 44-yard touchdown run.

Breland went into his bag of tricks on the next Gator possession to get his team back into the game and set them up for a chance to win. Facing fourth-and-10 from the Ridgeland 27-yard line with just more than three minutes left in the third, Breland called for a fake field goal.

“We talk about it every week, we work on it every week,” Breland said. “I told Jermaine Wesley be ready when his number is called. I knew he was going to make a play and we lined up and executed just like we practice.”

Holder Jamaal Jefferson tossed a shovel pass to Wesley, who took it up the right sideline to the 2-yard line, and Alec Bailey punched it in on the next play. A missed extra point following the score left the Gators trailing 21-20.

“I worked every day at practice,” Wesley said. “Germantown game, I did the same play, but I had messed up on it. This game I knew something was in me and when I went up that sideline I was happy and explosive.”
Ridgeland and Vicksburg stalled on each of their ensuing possessions and then, with 11:21 left in the game, Anderson put the Gators ahead for good 26-21with his pick-six.

“He (Anderson) is our leader, our emotional leader,” Breland said. “I have been drilling that same drill with Nick for probably three years. I told him if you take your zone drop you are going to catch a pick they aren’t going to see you. He stepped right in and made a good play.”

JACKSON — The St. Aloysius Flashes scored more points than they have in 30 years, and quarterback Antonio Thompson joined... read more