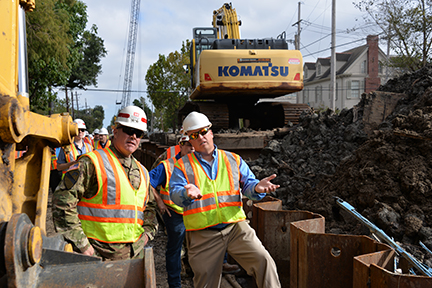 With that greeting, the new commander of the U.S. Army Corps of Engineers Mississippi Valley Division’s walked into his office and sat down to talk about his new command and his dual duties as the division commander and the position he will soon occupy as president of the Mississippi River Commission, which is responsible for making the Mississippi a reliable commercial waterway and protecting the towns, farms and homes along its banks from flooding.

His command covers a 370,000-square-mile area from the Canadian border to the Gulf of Mexico and includes portions of 12 states.

Maj. Gen. Richard Kaiser took command of the Mississippi Valley Division, Sept. 7 after returning from Afghanistan, where he was commanding general of the Combined Security Transition Command, Afghanistan.

“I had a tremendously important but challenging and rewarding job,” he said of the command. “My responsibility there was to provide the resources, training and materiel readiness needs for both the (Afghan) army and the police.

“I ran a multibillion dollar program, and I was responsible for purchasing every thing from helicopters to Humvee tires, building schools, refurbishing hospitals, providing training for women so they can proudly serve in the army and police, and a multitude of other things. We are making tremendous progress in Afghanistan.”

Throughout his 30-year military career, Kaiser has held many commands, and he said the experience has helped him prepare for an assignment like the Mississippi Valley Division.

“If you understand the concerns people have, and you respond to those, it’s going to go a long way toward building good relationships,” he said. “If you look at my command philosophy that I’ve had ever since I was a young commander, it consists of three components: competence, caring and balance.

“Those really are all focused around people. I’ve been in the Army 30 years, and the majority of my career has been tactical, field-focused units to include a lot of time jumping out of airplanes.

“I come back to the fact that that’s what solidified my focus on people. It’s about leadership.

“We have plenty of expertise in all these districts and the division headquarters, somebody has to provide the leadership guidance and direction to focus efforts. That’s what I provide.”

But there has been one experience that has probably prepared him more for taking command of the Mississippi Valley Division than any other. A former command as commander of the Corps Great Lakes and Ohio River Division, based in Cincinnati, Ohio.

“That was a great command to have before coming to the MVD,” Kaiser said, “Because the two divisions work hand-in-hand together, especially during flood fights.

“So in that capacity, I was appointed a member of the Mississippi River Commission. I spent about a year-and-a-half really becoming familiar with many of the issues that exist in this basin up and down the river, and became very familiar and had a great working relationship with most of the team here in Vicksburg.”

The missions of both divisions, he said, “Really are the same. The two areas are fairly similar; we have a lot of aging infrastructure, we do a lot of navigation work, we do a lot of flood control; flood risk reduction. Both areas do a lot of ecosystem restorations, both areas have small programs that deal with a legacy cleanup from the WWII era.”

“So the two missions are very similar, that’s why I say it was a very natural fit to come from there to here.”

In Great Lakes and Ohio River Division, Kaiser dealt with three rivers — the Ohio, the Tennessee and the Cumberland rivers, which all converge near Cairo, Ill. One of the major structures in the division is the Kentucky and Barkley Lake and the control structure, the Kentucky lock that holds that water back.

“It pales in comparison with activating the floodway at New Madrid, but I’m very keen into how the systems work together, and what you’ll find is the main goal in my previous job was do everything humanly possible that we could do to prevent the activation of the New Madrid Floodway.”

The New Madrid Floodway is a structure built to relieve pressure on Cairo, Ill., and property in Missouri, Arkansas, Kentucky and Tennessee from the threat of flooding during extreme floods. It was activated during the 2011 spring Mississippi River Flood, when the levee separating it from the river was blown.

“Before I assumed command, I went to New Madrid and stood on the floodway and discussed the actions that occurred during the 2011 flood when it was activated,” Kaiser said. “We came close a few times (to opening it) when I was commander of lakes and rivers, and thank goodness we did not have to activate it.”

Coming in as the new Mississippi Valley Division commander, Kaiser has several priorities.

“The most important thing for me is No. 1, do everything I can to support all of my districts upriver and downriver; make sure those commanders have the resources, the guidance the policies they need to perform their missions; that’s first and foremost.

“The second most foremost is the relationship with our stakeholders, partners, and everybody who lives and breathes and earns their living along the Mississippi River.”

Kaiser is presently serving as president-designee of the Mississippi River Commission as he waits for his formal appointment to become official.

He said the two roles are in some ways similar, but distinct.

“In my role as the commanding general for the Mississippi Valley Division, I have certain authorities that I have to execute, I have decisions I must make, and sometimes, those decisions may not be what the Mississippi River Commission might wish them to be. So there can be a dynamic tension between my role as the commanding general of the division and the president of the MRC.”

Kaiser said serving as the River Commission president is an absolute honor.

“It’s an honor to go up and down (the river) and do these public meetings. It is America in action, and you couldn’t get any more clear than when you’re up there and you listen to American citizens get on that vessel and talk about their concerns about the river, because it dramatically affects their lifestyle their livelihood and everything associated with their lives on the river.”

Kaiser said he is still assessing the division as he gets accustomed to his new command.

“There’s so many great examples of wonderful projects being done in every district, but there’s also challenges; every district has their unique challenges, based on environmental considerations that they face, challenges with funding or opposing viewpoints from different parties.

And I’m going to go where the challenges are first.”

For more than 35 years the Haven House has served as a sanctuary for women and their children who are... read more