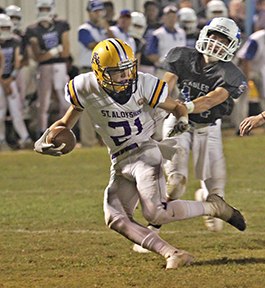 Last week, the St. Aloysius Flashes played their best game of the season. Now they’ll play their most important one.

The Flashes, who are coming off a 76-14 demolition of Hillcrest Christian, will head west to Rayville, La., to face Riverfield Academy this Friday night in a do-or-die game in the regular-season finale. Win, and St. Al could earn a wild card berth in the MAIS Class AAA playoffs. Lose, and it’s out of the postseason for the first time since 2012.

“Win and we’re in. Lose and we need a lot of help that I don’t think we’re going to get,” St. Al coach Michael Fields said. “We’re just looking at this game here. We’ve got to win. We don’t care about the seed we get. We just want to get into the playoffs.”

St. Al is currently tied with Porter’s Chapel Academy for 16th in the MAIS power point rankings that determine wild card berths and playoff seeding. The 16-team field is comprised of five district champions that receive automatic bids and 11 wild cards based on power points.

Teams receive points for victories, as well as for playing higher-classification teams and opponents’ victories. The total is then divided by the number of games played to come up with an average that is its power point rating.

“That makes a difference in your draw in the playoffs, so we’ve both got something to play for,” Fields said.

In addition to its wild card hopes, St. Al has a chance to earn a share of the District 3-AAA championship. It won’t get to reap the benefits, though.

Central Hinds finishes the regular season with a non-district game against Washington School.

Riverfield would win the District 3-AAA championship outright — and earn a top-five seed in the playoffs — by beating St. Al.

Even so, getting to claim even a piece of the title would be nice, Fields said. It would mark the fifth consecutive season St. Al has done that.

“We’ve established that it in the past and we want to keep that going,” Fields said. “These seniors have had a lot of success. This was the freshman group that played for the (MHSAA) 1A championship (in 2014), so that should mean something to everybody.”

St. Al is coming off a win that put some extra pep in its step heading into the finale. The Flashes scored 62 points in the first half against Hillcrest, and their final total of 76 was the most they’d scored in a game since setting the school record with 84 in 1971. It was the first time they’d scored 60 or more in a game since 1986.

Quarterback Antonio Thompson had 12 carries for 230 rushing yards and five touchdowns in the win. That effort gave him more than 1,000 yards rushing and passing, after he just missed achieving that milestone last season. He finished with 1,003 passing yards and 923 rushing yards in 2016.

St. Al also scored three defensive touchdowns against Hillcrest in what was the team’s best all-around performance of the year. Now Fields believes that will carry over to a game the Flashes need to win to prolong the season.

“A lot of it was motivation. The guys knew they had to win and we had some good things happen in the first half,” Fields said. “One thing I’ve learned is that when you’re dealing with young kids, the only thing they see is success and they want more of it. They score one touchdown and they want to score another one. So it’s a good confidence booster and momentum-gainer for this week.”

Three weeks ago, Warren Central’s volleyball team was facing off against perennial power Madison Central and not faring too well.... read more