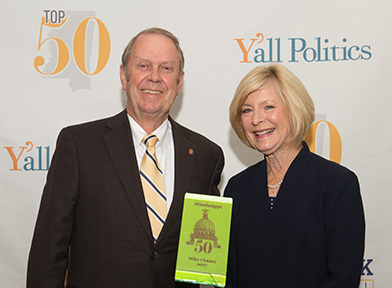 Chaney honored as one of the top influential people in Mississippi

Mississippi Insurance Commissioner and longtime Vicksburg resident Mike Chaney was honored Tuesday night as one of the top 50 most influential people in Mississippi.

The non-partisan awards recognize people who help the state move forward through their position and talent. The awards are sponsored by the political website Y’all Politics and the statewide talk radio station Supertalk Mississippi.

“To be chosen as one of the top 50 influential leaders in Mississippi is an honor, especially when I have a job I truly enjoy,” Chaney said. “I love our state and feel like my staff and I are making a difference in the quality of life for all Mississippians.”

Chaney was honored for his ability to work with local, state and national officials to achieve good government.

“He is leading to make strides in healthcare reform; disaster recovery from flood, tornado and hurricane events; bail bond industry reform; and reductions in state fire deaths,” according to the statement about Chaney on the MSTop50 Awards website.

A Tupelo native, a graduate of Mississippi State University and a Vietnam veteran, Chaney also serves as the state’s fire marshall as part of his duties as insurance commissioner.

He was inducted into the Insurance Hall of Fame at Mississippi State. He received the Distinguished Service Award from the University of Mississippi Risk Management and Insurance program and its Professional Society. He has been named one of the top insurance professionals by Insurance Business America Magazine, and was named a Healthcare Hero by the Mississippi Business Journal.

He served as a state representative before becoming insurance commissioner in 2008.

“He’s not looking for that next job and he comes into the office every day,” said staff member Sandy Ray. “I truly believe he wants to leave this state a better place when he dies. His heart is truly in the right place.”

Fifteen guns — seven handguns and eight rifles — were reported stolen from a home in the 1400 block of... read more