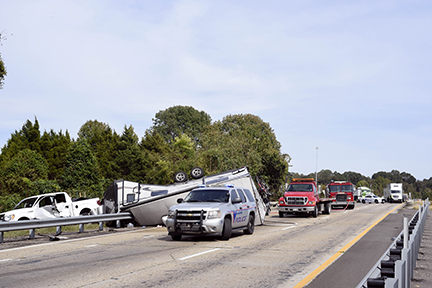 An overturned vehicle blocks one lane of westbound travel of Interstate 20 near the Clay Street exit Friday. The cause of the accident is unknown. (Courtland Wells/The Vicksburg Post)

Accident ties up I-20 traffic

A wreck Friday afternoon caused westbound traffic delays on Interstate 20 when a truck pulling a camper trailer was involved in an accident near the Clay Street exit. The camper became entangled on the guard rail and a crane had to be used to remove it. Traffic was reportedly backed up as far as Bovina.

Two people were reportedly transported to the hospital, while the cause of the accident is unknown.

A Vicksburg woman faces a charge of murder in the stabbing death of a Warren County man early Friday afternoon,... read more