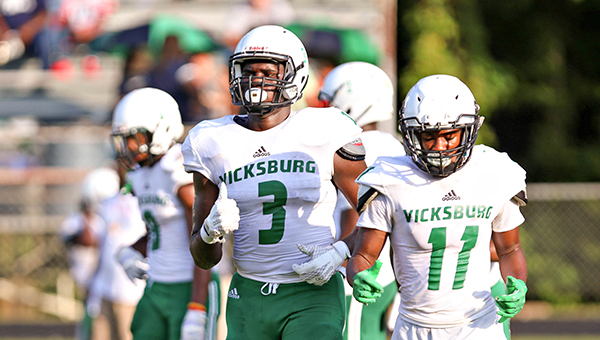 Gators have golden opportunity at Canton

When Vicksburg High goes on the road to play Canton on Friday night, it’s not just a football game for the Gators.

A win would give them some more separation in their quest for a playoff berth, and knock another of the Region 2-5A challengers down a rung. It would pull them within, potentially, one win of clinching a spot and continue the remarkable renaissance that has taken place within the program in the past month.

“Our district is always going to be close. Everybody’s right there in the hunt. Everybody’s right there in the mix. You not only have to prove it, you’ve got to earn it,” Vicksburg coach Lorenzo Breland said. “We know these last three aren’t going to be easy by no means, but if we get out and play our game and protect the football, and play with that momentum early I think we’ll be OK.”

The Gators (2-6, 2-2 Region 2-5A) started the season with five straight losses, but have won two out of three since then. They’re tied for third place in Region 2-5A with Callaway, which they play next week in Jackson, and have already faced the top two teams in the league, Germantown and Cleveland Central.

Besides finding success during a softer part of the schedule — Canton (5-4, 1-3) is the only team in the region, other than the two frontrunners, with a winning record — Vicksburg has also played exceedingly well the past three weeks.

The defense has posted one shutout and scored the winning touchdown in last week’s 26-21 win over Ridgeland, on an interception return by Nick Anderson. The special teams has also come up with several big plays, like a 25-yard gain by Jermaine Wesley on a fake field goal last week, and the offense has been more productive than it was during that dreadful opening month of the season.

After averaging an anemic 150.8 yards per game during the losing streak, the Gators have improved to more than 200 per game over the past three weeks. They had 349 yards against Ridgeland, including 66 rushing yards by backup running back Malik Shelley and a touchdown reception by wide receiver Cedric Phillips.

That’s not terribly robust, but when paired with the plays made on defense and special teams, as well as better limiting its penalties and turnovers, it’s been good enough.

“We’re peaking at the right time. We had our struggles early in the season, but now we’ve been slowly turning the corner week by week and getting better, and that’s what I told them is the goal — to just keep getting better every week and win a game a week,” Breland said.

This week, the goal is to beat a desperate Canton team whose playoff hopes are hanging by a thread. The Tigers won four of their first five games, but have lost three of four since the start of region play. Two of the losses have been by a total of seven points, including a 28-24 setback against Callaway last week.

Canton finishes the regular season with games against Germantown (5-3, 4-0) and Cleveland Central (9-0, 4-0), so beating Vicksburg might be its last best chance to pick up a key head-to-head tiebreaker and stay in the playoff picture. A loss could eliminate the Tigers entirely, depending on the outcome of Friday’s game between Callaway and Holmes County Central.

With Canton spiraling downward and the Gators heading in the opposite direction, Breland said the key would be to make sure neither of those trends changes.

“They’re an athletic bunch. They get after you on defense and throw the ball around on offense. They’ve got some good receivers. They’ve definitely got some athletes. So we have to go over there and play with some confidence and momentum early, and don’t give them momentum so we won’t be in a dogfight,” Breland said.

Literature opens our eyes to reality around us

I am an avid reader and always have a book going. Currently, I am reworking my way through the second... read more