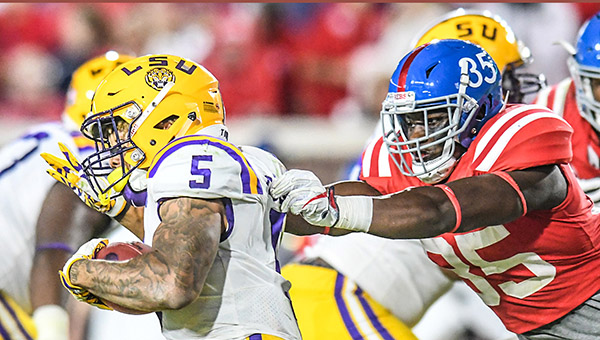 LSU running back Derrius Guice (5) escapes the grasp of Ole Miss linebacker Donta Evans (35) on Saturday. Guice ran for 276 yards and a touchdown to lead LSU to a 40-24 victory. (Bruce Newman, Oxford Eagle via AP)

OXFORD — Derrius Guice made history at the expense of Ole Miss.

The LSU running back became the first player in Southeastern Conference history to rush for more than 250 yards three times in a career, as he totaled 276 yards and a touchdown on the ground in a 40-24 win over Ole Miss on Saturday night.

Guice had four runs of 25 yards or more, including a 59-yarder in the first quarter that set up his 7-yard TD on the next play. The 5-foot-11, 218-pounder had 126 yards in the first half, which was already good enough for his season high

It was the second year in a row that an LSU running back had a huge game against Ole Miss. Leonard Fournette ran for a then-school record 284 yards last season against the Rebels. Guice had 285 yards a month later against Texas A&M to better the mark. Guice also ran for 252 yards against Arkansas last season.

Guice carried the ball 22 times. Quarterback Danny Etling was only 9-of-13 passing, but finished with 200 yards and two second-half touchdowns. He also ran for a TD for LSU (6-2, 3-1 SEC).

Ole Miss (3-4, 1-3) came into the game with the SEC’s most prolific passing offense, but struggled for pretty much the entire night against LSU’s defense.

Ole Miss quarterback Shea Patterson — who came into the game leading the league with 2,143 yards passing — hurt his right knee during the second quarter and didn’t play the final series of the first half. He returned in the second half, but the Rebels’ offense didn’t fare much better.

Patterson completed just 10 of 23 passes for 116 yards, no touchdowns and three interceptions. Ole Miss running back Jordan Wilkins carried the ball 13 times for 86 yards and one touchdown.

Dick and Tina Grau have much more in common than just being husband and wife for the last 27 years.... read more