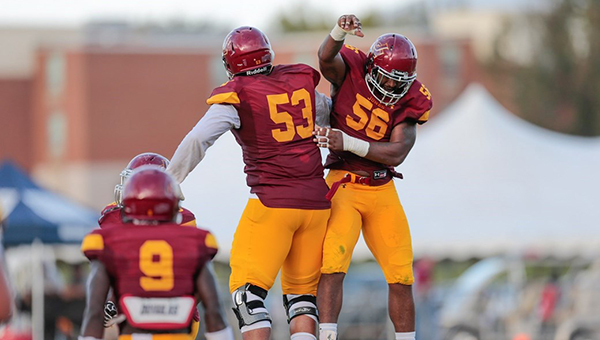 ELLISVILLE — Tenth-ranked Jones County Junior College used a fake punt to set up the go-ahead touchdown, and held on to beat No. 4 Hinds Community College 41-36 on Saturday in a battle of national junior college football powers.

With the win, Jones County (7-1, 5-1 MACJC South) clinched the division title. It will host the second-place team from the North in a first-round state playoff game on Nov. 4.

Hinds (6-1, 5-1) has clinched the No. 2 seed from the South and will play at the North Division champion in the first round of the playoffs.

Hinds finishes the regular season on Oct. 26, at home against No. 7 East Mississippi.

Hinds led 36-34 midway through the fourth quarter on Saturday and appeared to have gotten a defensive stop at midfield. Jones punter Taylor Wallace took the snap in an offset formation, which allowed snapper Reilly Reardon to be an eligible receiver. Wallace connected with Reardon for a 19-yard pass and a first down.

Two plays later, DeShawn Smith scored on a 7-yard run with 3:57 to play to give Jones the lead for good.
Scott Phillips was the workhorse for Jones, with 27 carries for 219 yards and two touchdowns. Smith had 17 carries for 88 yards.