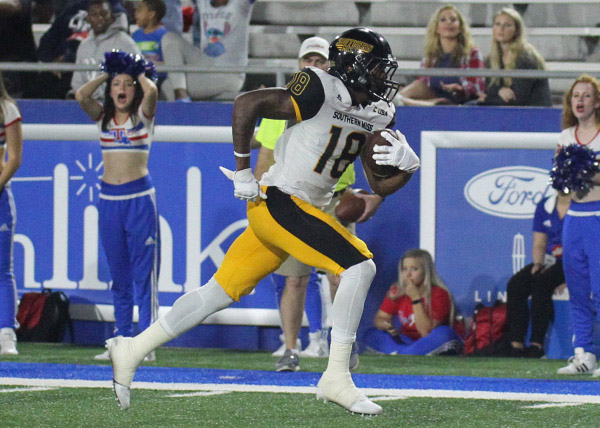 Southern Miss wide receiver Korey Robertson runs down the field after catching a pass Saturday against Louisiana Tech. Robertson caught the game-winning 25-yard touchdown pass in the second overtime to give the Golden Eagles a 34-27 victory. (Joe Harper/Southern Miss Athletics)

Southern Miss (5-2, 3-1 Conference USA) pulled within 27-19 on Parker Shaunfield’s 49-yard field goal with 1:23 left in regulation and then recovered an onside kick. Howard hooked up with Robertson from 22 yards out and then found Jay’Shawn Washington for the two-point conversion that sent the game to overtime.

Both drives in the first overtime were stopped by interceptions, but Howard connected with Robertson on the first play of the second overtime for the go-ahead score.

On Louisiana Tech’s second possession, Draper Riley sacked quarterback J’Mar Smith on second down to force the Bulldogs into a third-and-24 from the USM 27-yard line. Smith threw a pair of incompletions to end the game.

Smith, who came into the game fifth in the nation in passing yards, completed just 11 of 28 passes for 194 yards and an interception.

Howard completed 32 of 53 passes for 301 yards and three TDs, but also threw two interceptions.  He also ran for 63 yards. Robertson finished with nine receptions for 127 yards and two touchdowns. Running back Ito Smith had 88 total yards — 48 rushing and 40 receiving — and a receiving touchdown.

Lousiana Tech (3-4, 1-2) senior Jarred Craft had 10 carries for 45 yards giving him 2,002 career yards. He is the 14th Bulldog to accomplish the feat. Boston Scott led the Bulldogs with 11 carries for 106 yards and a touchdown.

Southern Miss has won 10 of the last 13 meetings with Louisiana Tech and is 16-8 in Ruston.

OXFORD — Derrius Guice made history at the expense of Ole Miss. The LSU running back became the first player... read more