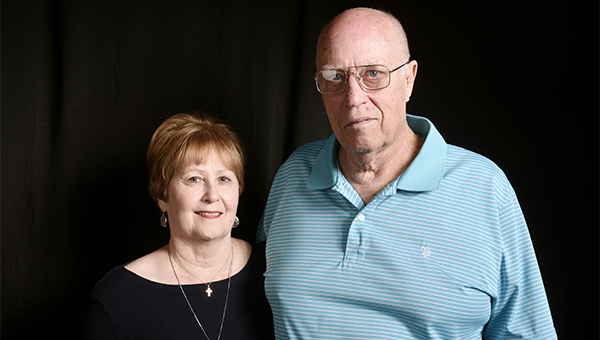 CANCER SURVIVORS: Tina and Dick Grau were each diagnosed with cancer within a month of each other in 2011.

Dick and Tina Grau have much more in common than just being husband and wife for the last 27 years.

The Vicksburg couple endured cancer together, both diagnosed within a month of each other in 2011.

“We had to keep notes on each other to keep up with doctor’s appointments,” Tina Grau said.

Dick Grau, who underwent knee replacement surgery just weeks prior to his cancer diagnosis, said he had been having some issues in October 2011 and decided to get a second opinion at University of Mississippi Medical Center after seeing a local physician. That’s where his diagnosis of kidney cancer was confirmed.

“There’s nothing more fun than going to UMMC emergency room on a Saturday night,” he sarcastically said.

“He saw a doctor at three in the morning,” Tina Grau added.

“The folks at UMMC were wonderful,” Dick Grau said. “They ran a few tests and sent me home to wait on the results.”

The pain he was in was too much to handle and Grau was rushed back to UMMC a day later.

“I was ready to be shot, the pain hurt so bad,” Grau said.

He said it took several CT scans, MRIs and other tests to finally figure out what the problem was. He said it was finally an angiogram, which discovered a fistula wrapped around the outside of his kidney.

“They found some (cancer) cells in the bladder wall, but they knew it had to have dropped down,” Tina Grau said.

During these tests the doctors also found blood vessels wrapped around the outside and inside of his kidney that shouldn’t be there. The doctors believe it was caused by a trauma of some kind.

By December, UMMC doctors were planning to remove the kidney.

Meanwhile, Tina Grau discovered a lump while doing a self-examination in October

She went to see her gynecologist.

“And when the doctor comes back in with the mammogram technician, I knew it wasn’t good,” Tina Grau said. “I wasn’t going to tell him (Dick) until I knew.”

She was set up to have needle biopsies, but by the time she got home the doctor’s office had called and Dick Grau saw where there was a missed call from Dr. Phillip Ley – “The go-to guy,” as Tina Grau said.

“I walked in the door and he said ‘what is going on?’” Tina Grau said.

On Oct. 24, 2011, Dick Grau was set up for a cystoscope at UMMC and Tina Grau had her first needle biopsy.

“I just knew it was going to be okay,” Tina Grau said. “He wouldn’t let me change that appointment.”

“I told her ‘look, you go take care of yourself,’” Dick Grau said. “They were still trying to figure out what the problem was with me at the time.”

“His surgery took eight hours,” Tina Grau said. “And when he came out, he was gray and waxy looking. But it was amazing how fast he came around.”

His cancer case was so unique that Dr. Chad Huckabay, who did the surgery, decided to write a paper on it and publish it in a medical journal.

“They had to dice and slice to find the cancer in the kidney,” Dick Grau said.

Meanwhile, in the last two months of 2011, Tina Grau began taking chemo treatment for her cancer.

While Dick Grau didn’t have to undergo chemotherapy or radiation treatments, Tina Grau did both.

She also had 38 radiation treatments after her mastectomy surgery on Valentine’s Day 2012.

“We took care of each other,” she said. “I was giving him shots in the belly after his surgery.”

“And I was straining her drains,” he said.

They did help each other recover, but they also credit their friends and family.

“I tell everybody the good part about the whole thing with us both having one foot in the grave was all the friends bringing food,” Dick Grau said.

“We were blessed,” Tina Grau said. “Our friends, neighbors, everybody just blessed us so much.”

They’ve both been cancer free since that time.

“We are finally down to yearly checkups,” Tina Grau said. “When they kick you out and say ‘don’t come back for a year,’ is a great feeling.”

The couple, who have a blended family of four children and four grandchildren, said their relationship was close before being diagnosed, but grew even closer.

“What got us through was our faith, our family, our friends and each other,” Tina Grau said.

“It was countless how many were there for us.”

“You just have to have faith in the doctors and the Good Lord,” Dick Grau said. “They all know what they’re doing and there’s a purpose in all of this.”

The couple said they never really got down.

“We tried to stay positive,” Tina Grau said. “You’re tired, but you stay up for each other.”

She said attitude plays a key role also. “I think attitude means a lot,” Tina Grau said. “I’ve seen people who didn’t have a good attitude going into it.” Their advice for others dealing with cancer?

“Have faith in God and the doctors,” Dick Grau said.