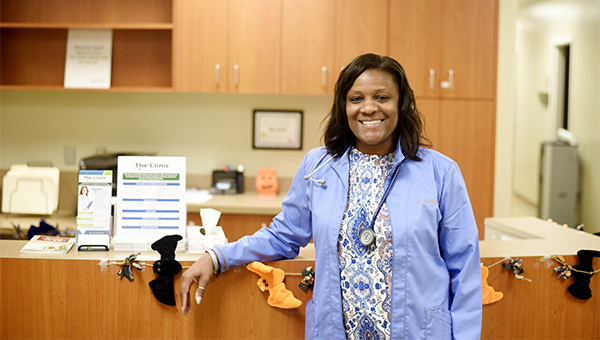 Carmeshia Cain, FNP-BC poses for a photo inside of the City of Vicksburg Clinic Friday. (Courtland Wells/The Vicksburg Post)

City sees more than $600,000 in savings in first year of health clinic

More than 60 percent of Vicksburg city employees and more than 43 percent of their spouses have used the city’s in-house clinic since it opened in Nov. 2016, according to a report by Vigilant Health, the health care organization operating the clinic.

Open Monday through Thursday from 7 a.m. to 4 p.m. and Friday from 7 a.m. to 3 p.m., the clinic was established by the city as a way to reduce health insurance costs by providing a place employees and their families can go without having to pay a copay, or as an alternative to going to the hospital emergency room for minor medical problems like colds or aches and pains.

Known as “The Clinic,” the program opened Nov. 1, 2016, managed by the then-Southern Health Network. Southern Health recently changed its name to Vigilant.

“I think it’s headed in the right direction,” Mayor George Flaggs Jr. said. “It’s saving us money and it’s still within our budget. We just need to continue to fine-tune it to make it more accessible after hours and weekends so it meets the needs of the families of the employees. I think when we do that, we’re going to see some big results. I’m very pleased with the outcome so far. I feel real good about it.”

“I think as employees get more acclimated to it and we make it more accessible it’s going to be a win for all of us,” he said.

“We’re pleased, we think it’s doing well for the city,” said Dr. Marshall Bouldin, The Clinic’s medical director. “We do health and wellness assessments, we do health screenings, we have a health coach as well, who instructs them in lifestyles, and that is very well received. We assist patients with chronic conditions. We see everybody on the plan down to age 2. We’re quite proud of what we’re doing.”

He called the initial employee participation “pretty amazing” for a wellness clinic.

“It has taken a while for things to get rolling, but as the people began to know us and accept us, they have started coming in,” said Carmeshia Cain, a family nurse practitioner who is the clinic manager.

Located at 1 Medical Plaza across from Promise Hospital, the clinic has three examination rooms and a lab. Cain and a nurse staff the clinic, with doctors coming in on a rotating basis.

Although the clinic has seen several patients for sinus problems caused by the change of seasons, Cain said, most of the patients come to the clinic for diabetes and high blood pressure.

“They come in and we help them get it under control, and then they come back for follow-up visits so they can keep it under control,” she said. “We have a health coach who works with the patients on keeping their blood pressure down and their diabetes in check. If somebody has high cholesterol, she helps them by showing them how to have a healthy diet and the foods they should eat.”

She added the clinic also has a program to help patients stop smoking.

In the beginning, she said, the clinic had a lot of walk-in traffic, but people are now setting appointments to come to the clinic.

“We try to work within the context of the health community and the patient. We try to engage and manage their care beyond the walls of the clinic,” he said. “We are adding programs and growing all the time, we’re developing new programs for health management.”

Dick and Tina Grau have much more in common than just being husband and wife for the last 27 years.... read more